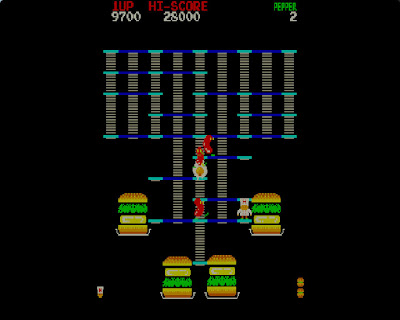 So hey, haven't been around here much lately. Sorry! Busy busy. Work, non-work, and then BurgerTime.

When I was a kid, I loved video game arcades, even though I sucked horribly at pretty much every game -- forget getting to the second level of Donkey Kong, I just wanted to get past three barrels without dying. But I found them pretty magical, and if you had told age-10 me that age-35 me would be friends with someone who had several coin-op video games in his house, I would have figured that I'd be hanging out with the Prince of Monaco or something at age 35.

I don't think ICJ is the Prince of Monaco (speak up if you are, though!), but every time I visit him back in Colorado, I get a bit of that amazement back. And the suckiness, too, because I'm still awful at Tempest.

So ICJ was the logical person to go to when I felt the need, the craving, for an authentic BurgerTime (or Burger Time, or Burgertime) experience this past week. If you never played it, in BT, you're Peter Pepper, who has to run on top of hamburgers to make them fall down into a little box. The whole time you're being chased by angry pickles, hot dogs, and eggs. It's just like life.

I had found this Flash version, which is pretty faithful, but I needed the full-fledged version -- music, feet on the hot dogs, eyes on the pickles. I needed it to be as real as possible.

ICJ did some research and confirmed that there is no Xbox version of the game, and no PC version, so ... I was doomed. And then he said, uncertainly (well, I am projecting here - we were instant messaging) -- "have you thought about MAME?"

Ah, MAME. I tried it once, years ago, and couldn't get it to work on my computer, so I forgot about it. But with ICJ talking me through it, I got it to work (it's not really that hard), and now... it's Burger Time all the time here. It was one of the only games I was good at as a kid, and I'm sad to see I'm pretty rusty, but at the rate I'm going I'll be playing it about 10 hours a day within the week.

Apropos of that, two old arcade stories that this brought to mind:

When I was a kid, hanging out at Chuck E. Cheese's, I was initially unaware of the common move of putting a quarter on the marquee to signify that you had next game. So when I was playing, I dunno, Zaxxon one day and some other kid put his quarter up, I figured he was helping me out with my Zaxxon awesomeness, and in the sort of smooth asshole move that I could never have pulled off had I known better, I reached up, took his quarter, and popped it into the machine for a new game. He didn't say a word (which was good, because I was enough of a wimp that I would have spent a week in traction if he'd so much as pushed me) and walked away. Some weeks or months later, I realized what I'd done, and I still feel pretty ashamed. I hope he didn't grow up to be a serial killer or something.

Then, in an attempt to get decent at Donkey Kong, I bought a paperback book that professed to show you how to get good at video games. I didn't think that maybe it had hints and tips that I should consider and work into my mind before playing -- no, I decided to READ THE BOOK AS I WAS PLAYING THE GAME. Here's a tip for playing Donkey Kong: don't try to read a paperback book with one hand as you're playing. Imagine a bespectacled, skinny kid working the joystick with one hand, holding the book open with the other, then realizing, oh shit, you need a free hand to hit the "jump" button. All things considered, it's good my parents didn't take me to arcades too much.
Posted by gsdgsd13 at 12:02 PM