Images on APTN television in North Korea showed thousands shouting “Let’s smash,” as a sign showed hands crushing a missile on which “U.S.” was written, the Associated Press reported.

If I got government-sponsored opportunities to shout "Let's smash," I'd be so much more patriotic.
Posted by gsdgsd13 at 9:01 PM No comments:

Nothing personal to anyone here, but if I'm called upon to attend any of your weddings in the near or far future, don't be offended if I show up sans necktie. I went to Nixy's wedding last night and nearly missed it because it took me somewhere around 40 minutes to get the necktie proper. Sounds severe, but consider: I think the last time I wore a necktie was 2004 or 2005. I don't do it often, and last night ensured that it'll be a long time before I do it again. I ended up going to the web and searching for "how to tie a necktie" (with another browser page open, searching for "is it acceptable to not wear a necktie to a wedding"), and after multiple aborted attempts, I finally hit it right with this page. Relache in Seattle, whoever you are, you have my gratitude. The rest of you, if I die and they want me to wear a necktie in the coffin, try to convince them to dress me in something I could conceivably have put on myself while living -- a hockey jersey, or pajamas, or something.

In other news: it's been in the neighborhood of 100 degrees all week here, combining the broiler-pan feel of Arizona with insane, unrelenting humidity. There's no jokes to be made about this. Quite simply, Atlanta's not made for human habitation.
Posted by gsdgsd13 at 7:16 PM 1 comment:

I try to be a better person, and less negative, and then I come across something like this and just feel giddy (sorry, Britt!). I need some perspective in my life.

I've got a really normal, stable, healthy family. It's a miracle that I'm as fucked up as I am; they're close, supportive, sane human beings. So perhaps because of that, reading about dysfunctional families is always kind of uncomfortable for me -- possibly because I'm thinking "there but for the grace of God," possibly because I'm afraid that deep down there's not much of a difference.

The Ski Bum gave this to me a while back, and I put it off for the right time, figuring (Man Booker winner, dysfunctional family) it would be heavy and quite a time commitment. Then I zipped through it in two nights and change. It fairly crackles with tense energy -- it's not a comfortable read but it's a riveting one. When I started it Sunday, I couldn't put it down until I was on the point of unconsciousness.

It's stark and it's sad, and it's not light-hearted in the least, but it's a great book. I may have to start going through the Man Booker winners. Looking at a list, I've read a few already, and there's a couple more waiting on the shelf.
Posted by gsdgsd13 at 8:27 PM 2 comments: 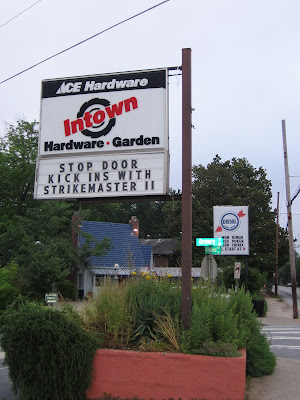 The hardware store a few blocks away has had that on its sign for the past month or so. Usually in the past, the messages have been charming and cheerful, but now: stop door kick-ins. There's been a lot of talk about crime in Atlanta in the past six-eight months, but as far as I know, there hasn't been much near me (though that may just be because I don't talk to people a whole lot). Perhaps there's a rash of door kick-ins going on.

Read the message a bit closer: it seems to be aimed at people who have suffered several door kick-ins already. You've had your door kicked in three times -- don't let it happen a fourth time. If I'd been through that, then sure, I'd probably be ready for the Strikemaster II (I guess if you haven't had any, then you just get the Strikemaster I). Or I'd move.

Van de Wetering will get something of a break after this -- I think it's surpassed my Lawrence Block rediscovery of last year. I don't think I ever read this one before either, and this may be the point where the series starts getting more off-kilter. It's pretty uneven and has a rather brutal and out-of-character bit to it, but it's the most interesting of the novels so far.

I hadn't read Borges since college, I believe, and this was pretty fun -- his blending of reality and fantasy is effective enough that even knowing better, some of the references sent me to the internet to see if they were real. It's easy to see now, in retrospect, just how much he influenced Grant Morrison, for one.
Posted by gsdgsd13 at 1:52 PM 1 comment: 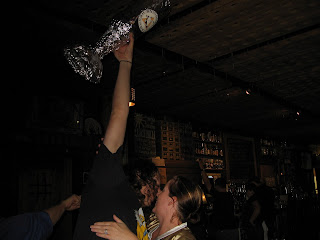 (not the real Stanley Cup)

Emerged from recent seclusion last night, for (primarily) a friend's bachelor party and (secondarily) Game Seven of the Stanley Cup. Cheering for Pittsburgh, natch -- not just because of Wing-hate; if you can't guess why I might feel some fondness for the black and gold, you haven't read this too much. Given my recent disaffection toward hockey, it was good to get out, see a great game, be around some genuinely good fans (there was a large Pittsburgh contingent there, and they were both cool and die-hard. Glad to see a Russian Conn Smythe winner, good to see a measure of redemption for Miro Satan (I actually took a photo of the screen when he got the Cup -- it didn't turn out so well). I actually felt a bit bad for the Wings until Kris Draper opened his stupid mouth; I actually felt a bit bad for Wings fans until one of them came over looking for a fight with some of the Pens fans.

The one guy I really do feel bad for? Marian Hossa, who seems to be the target of lots of sneering today. The guy did what players should and went to the place he thought he'd have the best chance of winning the Cup, and he's been pilloried for it. I've been a fan since he was down here in Atlanta, and the one good thing about a Detroit win woulda been seeing him get to skate around victoriously.

Also learned last night: I like darts a lot, but play about once a year, and in the interim I tend to confuse enthusiasm with skill. As I was reminded repeatedly, there is no skill. Boy do I suck.

And Twain's, in Decatur, is a pretty cool bar. Too bad I've never been before now, too bad it's a little beyond my usual radius. I liked it.
Posted by gsdgsd13 at 7:11 PM No comments:

I've written in the distant past about my fears that I'll leave the coffee maker on and it'll leave the house a charred husk. So today I got to work, sat down, started tasks, then realized: I left it on. No chance I didn't this time -- I didn't drink the last bit in the pot or pour it into a traveling mug, and that's when I always turn it off. Crap. Crap crap crap. I could already see the flames. I called the Ski Bum, left a message asking her to go over and turn it off for me. She did go over... and it was off.

So it turns out that my coffee maker turns itself off after two hours. And I've been driving myself nuts about this for years.

It appears that, after some back-and-forth on his status, Gabon's President Omar Bongo is indeed dead at 73. I don't know much about him -- he was there for a long time, didn't do a great job -- but he endeared himself to me slightly by having his own Facebook page before other leaders jumped on the bandwagon. Not a supporters' page, an actual personal page. He anti-endeared me by not accepting my friend request, but I guess he probably wasn't feeling so great the last year or so.

Two surprises here: one, finding out last night that van de Wetering passed away, and some time ago. I'm not that tuned into the literary world but that struck me as something I should have known. I'd guessed he was probably in poor health -- no new books since the 1990s indicated a retirement of some sort -- and he was on in years, but it's still a bit of a (delayed) shock.

The second surprise was that I actually hadn't read this book, and I thought I'd read 'em all except for the short stories collection. It's more of the general thoughtful mystery that I've read about before, and natch it increases my desire to visit Amsterdam. There's nothing particularly mind-boggling, and I'm realizing that perhaps my 21-year-old self oversold just how great these were to my 36-year-old self. They're great fun but I don't feel my mind expanding.
Posted by gsdgsd13 at 6:22 PM No comments: 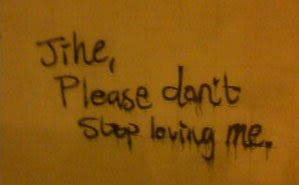 I Haven't Quit, I Just Don't Have Anything To Say 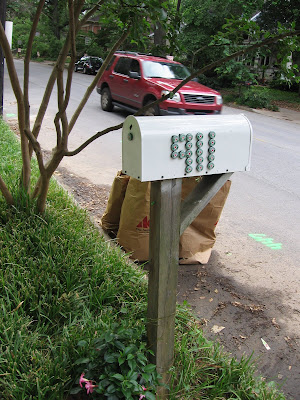 Virginia Avenue, Atlanta.
Posted by gsdgsd13 at 10:14 PM No comments: