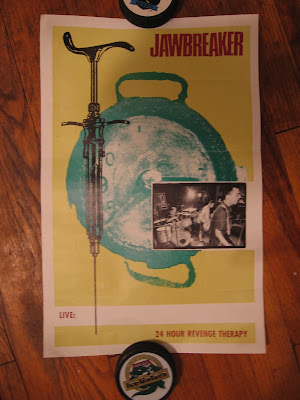 My final bit of professional music writing was written just about ten years ago -- a profile of Jets to Brazil for my friend Brian's then-magazine, Soundboard. It's both the best music writing I did and some of the most embarassing; best in that it shows a skill and passion lacking from a lot of the previous work (when I was usually writing about albums called "Songs of Gaia" or whatever, which may explain my lack of interest), embarassing in that it was pretty fawning over Blake Schwarzenbach. I mean, you woulda thought the guy was Tomáš Klouček or something.

But it's kind of understandable. For my generation and group of Tucson kids, Jawbreaker was the ultimate, the band we wished came from our town, the band we wanted to hang around. All of us followed their career pretty closely; I heard the "Busy" single at my friend Matt's house for the first time not long after becoming aware of the whole Tucson scene, followed shortly thereafter by "Unfun," and from there I remember listening to "Bivouac" in my brother's room and thinking this band went beyond anything we'd heard before, and then "24 Hour Revenge Therapy" which was something like "Exile on Main Street" plus "London Calling" to us. Things couldn't get any better.

Now? Now I remember Jawbreaker fondly, and they still sound good when I give them a listen, though the worship is gone. Nothing's quite as spectacular as it was back then, I'm not coming into things new. It's not as exciting, but it's probably good -- makes my writing a lot less embarassing, at least.

I got this poster at one of Jawbreaker's shows at Tucson's Downtown Performance Center. I could probably fund all sorts of fun stuff by selling it on eBay, except that it's got all sort of sticky crap residue on the back and years of creases on the front.

It took me a bit to get comfortable with this one, because it followed the path of "The Honourable Schoolboy" a bit too much -- idealistic dreamer caught up in espionage trying to save woman. It seemed a bit repetitive. But it catches steam toward the end, the writing's fantastic, the plot's gripping, there's plenty of deep thoughts. And there's even an element of hope in the overwhelming cynicism, which I found unexpectedly pleasing.
Posted by gsdgsd13 at 10:09 PM 1 comment:

My mother is in a cleaning phase, so a few days ago I received a tube with a ton of posters rolled up inside. All of them one-time (mostly high school and college) wall decorations, most of them completely forgotten 'til now. It's been kind of a trip to go through them and see what I used to put up on the wall...

If there's one thing that could tempt me back to a comic book shop, it's the news that Paul Levitz is returning to write Legion of Super-Heroes (link via Legion Omnicom). It's sort of the equivalent of Rollins and Ginn joining up to do Black Flag again -- even if the results suck, it's kind of awesome. The Levitz/Keith Giffen era of LSH is one of my all-time favorite comics, and a recent reread of some of the highlights held up nicely. I know that this won't turn the clock back to the golden age (for me) of the mid-'80s, but I'll probably at least check it out.

By the time I got into the LSH, this poster (by Giffen and Larry Mahlstedt) was already legendary and well-nigh impossible to find. I got mine at one of Time Warp Comics' fantastic auctions; I remember it well because I had been salivating over the poster, and when the bidding opened, some acquaintance of my brother's started bidding against me, just out of spite, I guess. (He later claimed that some mysterious stranger had encouraged him to bid. I also remember the kid's name solely because of this incident, which doesn't speak well of my ability to let things go.) 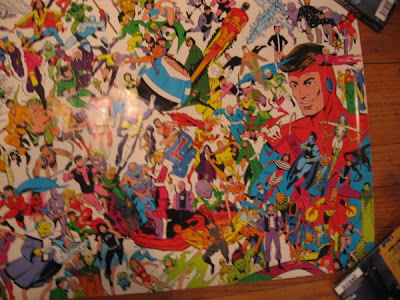 Anyway, I won the poster, and it had a place of pride on my wall for most of the next decade. It is, basically, just about every character who had appeared in Legion up to that point -- no small feat as that was more than 20 years of history in a character-crowded comic. By the end of the 1980s I could name about 95 percent of the characters on this; now, it's faded away to the main characters and a few scattered others. I'd like to say I've used the freed-up brain cells well, but it's mostly "hockey stuff" or "Eastern European politics" or "that time I did Goldschlager shots."

Levitz left the Legion in (I think) 1989; since then, it's had some good runs (I still hold up the "Five Years Later" storyline as a comics high point, and Mark Waid's reboot was cool) and some bad runs (a lot of the other stuff). The new series probably isn't enough to get me to hang this poster up again, but there's something that just feels right about Paul Levitz and the LSH getting back together. Things are as they should be.

Closed Captioning Still Has Some Bugs

I don't know how closed captioning works, here in 2010 -- I imagine some kind of voice recognition software, but in the absence of any information (or desire to look it up) I'll continue to imagine that it's a nervous, sweaty, chain-smoking little man, sitting in a dark cramped office and feverishly banging the words out. If that's true, that little man provided the highlight of my day today. (And is probably out of a job.)

The scene: Atlanta's Brewhouse Cafe, the Elk and I sitting at the bar, both hungover, both watching Chelsea versus Sunderland (side note: Sunderland's captain is Albanian (from Kosovo), vaulting them into the stratosphere of "soccer clubs Greg feels kindly toward). Somewhere in the midst of Chelsea scoring 62 goals, the closed captioning blathers along, then brings us the best sports name ever:

We determined, after a moment, that Joker Jerkoff is actually not his real name -- it's Yuri Zhirkov. Not as entertaining! He'll always be Joker Jerkoff to me.
Posted by gsdgsd13 at 7:03 PM No comments:

There's a section in this book that discusses the "moral aspect" of penalty kicks, and I found myself trying to imagine how it would go over if you tried to talk about the "moral aspect" of the shootout in the NHL or instant replay in pro football. You'd probably get your head kicked in. "Brilliant Orange" is marvelously quirky. Winner's smart enough to not push his general idea (the Dutch personality is mirrored in an odd attitude toward soccer, one that prizes form above results) too much and just go to it when it's fitting or fun. I haven't been to the Netherlands since I was five; everything I read makes me want to go now. And reading this makes me wish that similar skill would be applied to writing about some other sports.
Posted by gsdgsd13 at 8:19 PM No comments:

All right, I intended to start off with a bang and kind of failed. Three days in and I haven't done much of anything. Excuses: the Ski Bum got me an iPod Touch and I got her a Nintendo Wii, two things that are infinitely more fun than doing anything responsible. Also: it's been in the 20s here, so anything outside of staying in bed and reading isn't really advisable. And the Broncos' playoff hopes are on the line today so I've been devoting a lot of mental energy to directing good thoughts thataway.

One real resolution for this year (well, two -- get in better shape, as a nachos-and-wings diet worked against me maintaining my trim post-surgery figure). I have a pretty high ratio of talking about writing to actually doing it. I'd like to reverse it. Less talk, more rock. I'm going to declare it make or break time for the thing I've been writing forever; if I can't make serious progress it's time to put it aside and make something else the priority. I stumbled upon my old friend Therese's blog -- I've been reading through it this morning and it's pretty inspirational, someone with an actual plan and work ethic (as opposed to, uh, me).

I also intend to write more on this sucker, and more actual writing as opposed to just "I read this, here's what I thought." I'll keep doing the book diary but it sorta became the main focus in the past year. Time to change that. More about hopes, about dreams, about hockey.

All of this, of course, after the Broncos game.

What better way than a little Stalin to start the year? This is one exhaustively researched book, but it doesn't bog down at all -- it's, dare I say, pretty entertaining. I think of the old monster when I think of Stalin, but this is a whole lot of roguish behavior and womanizing. It's a rare book that can get into debates over Marxist theory and still be a fast read.
Posted by gsdgsd13 at 10:32 AM 1 comment: