I've had a post in the hopper about a couple '90s-era favorites that have recently re-entered my life, but I just haven't been able to get it done. Now it's being derailed by another '90s favorite -- I'm a few hours from flying back to Colorado to pay tribute to the mighty Valeri Kamensky. I'm doing this shit up right, with the #13 jersey out of mothballs and everything. Look forward to blurry photos.

And one more '90s favorite. At one point in life, I proclaimed Marty my favorite author. I'm no fan of his early books but the stretch of Money-London Fields-Time's Arrow-The Information-Night Train is quite an achievement, to say nothing of some fantastic non-fiction in there. Then came 9/11 and his responses -- "Yellow Dog," which started well then veered horribly off the rails; his increasingly blowhardish public pronouncements; and that weird-ass Mohammad Atta story.

In all that, I kind of overlooked "House of Meetings," though it drew some good reviews and has a Soviet theme to it. So consider this a catch-up. It's pretty good, and has a decent amount of those pyrotechnic sentences that only Amis could write. It's also pretty dour (though I suppose it's hard to imagine a novel about the gulag being anything but) and I wouldn't put it up in the above list of greatness. But it's at least some measure of redemption for a guy that I had mostly written off over the past five plus years.
Posted by gsdgsd13 at 7:03 AM 1 comment:

A Funny Thing Happened on the Way to the Olympics

I came into this year's games ready to do what I normally do: root for the Czechs, then root for whatever other Slavs are around once they're eliminated, then pack it in.

It's been a long time since I've rooted for a U.S. team. This isn't quite as dumbo knee-jerk contrarian as it may first seem; I'm not overly patriotic, and U.S. teams since NHL players joined the Olympic fray have had a disproportionate amount of jerks. Mathieu Schneider? Phil Housley? Brian Leetch, still my choice for most overrated player ever? Gary Suter? Jeremy Roenick, pre-post-career rebranding? Keith Tkachuk? CHRIS CHELIOS?? Toss in a Red Wing goalie or two and this is basically my late-1990s least favorite players list.

But somewhere along the way they shed the creeps and now, holy crap, I feel ok rooting for them again. It's a fast spunky team, which I like, and there's a bunch of guys (Drury, Miller, Backes, Kesler, Erik Johnson, Stastny, Orpik) that I like or would like on my team. Yeah, there's a few exceptions -- Kane might be a grade-A shit and Rafalski plays for the Khmer Rouge -- but I can overlook that in the name of winning, particularly when Rafalski's scoring two goals. (Just forget how to do that when you get back to Detroit, Bri!)

It's kind of a fun feeling, waving my flag weakly and chanting "U-S-A!" Who knew? Now: please don't screw up.
Posted by gsdgsd13 at 9:06 PM No comments:

Now Everybody's Looking After Me

Wanted to like this more than I did. It starts off rollicking, set in a late-19th-century New York where anything seems possible. It's an absolute blast. Unfortunately, it eventually gets sidetracked by a love triangle in which none of the characters is particularly sympathetic or interesting. It gets back on track toward the end; it's a very fun book when Pinfold or most of the background characters take center stage. This is the first part of a trilogy, I believe; I read the second part some time back and liked it a lot. I'll probably give that another read pretty soon.
Posted by gsdgsd13 at 8:26 PM 1 comment:

So at the start of the year, I vowed less talking about writing, more writing. I've accomplished half of that -- turns out I'm pretty good at not doing something, as long as that something is not eating or drinking. The doing part -- not so much.

I did start a new project (the old one that I talked about for years is on hiatus), and started off like a house on fire -- aiming for a thousand words a day. The problem came when I realized that those thousand words were, almost without exception, garbage. This isn't a case of writing something, going back later, and wincing -- this was knowing it was shit as the words hit the page. It's pretty demoralizing.

A big part of the problem: the story's pretty humorless. This isn't necessarily a bad thing. My favorite Graham Greene novels are the bleakest -- there's not a lot of laughs in "A Burnt-Out Case." There's plenty of good, serious stuff out there, and the plot I came up with for this one required a serious touch. The problem is the way I write serious stuff. It's plodding, overly introspective, whiny. It's a whole lot of guys with a steely gaze looking off into the distance while contemplating the single tragedy that defines their lives. I've known this for a long time -- but I can't seem to correct it.

So: back to allegedly funny stuff it is (and another idea gets tossed on the hiatus bonfire). I've got a sense of humor -- studies have proved that -- and when I try to push it under, the results aren't pretty. Such is life. Onward.
Posted by gsdgsd13 at 2:39 PM 5 comments:

'Cause There Was No One Around 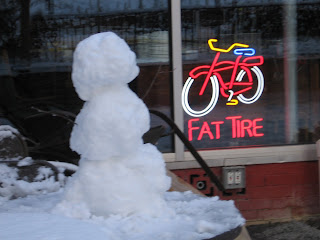 Snow day! Things warmed up a bit later on, but wandering the streets at 7 a.m. was pretty cool. Deserted and pretty. (and slippery.) 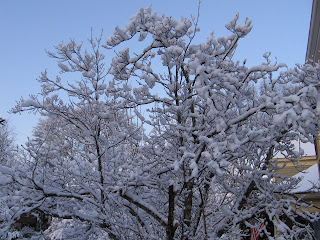 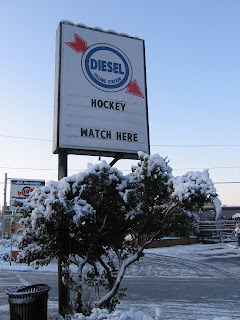 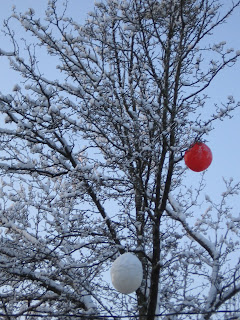 Ellroy goes long enough between books that I kinda forget about him and write him off, and then when he emerges with something like this I wish that a) I had time to go back and read all his books again in order, and b) that there were more of them.

This concludes the "Underworld U.S.A." trilogy, a good eight years after the last book, and ... well. It's fantastic. The themes and characterizations will be familiar to anyone who's read his past books, but it doesn't seem repetitive at all -- it moves fast, it hits hard.

And yet -- there are notes of hope and redemption that aren't really found in his other books. I don't think I'd ever describe Ellroy as "touching" but this is as close as it gets. And, if it's not clear, it's excellent. He's at the top of his game.
Posted by gsdgsd13 at 6:59 PM No comments:

I turned out for last night's Thrashers game in style -- a friend won a "night in the luxury box" raffle deal and I got in on the action. It's the fourth time that I've been in a luxury box but the first time that there was no chicanery involved at any point. I'll come out and say it: while I'm a man of the people and all, watching from a box is pretty sweet. I don't know if I can go back to mixing with the commoners now.

It largely flew under the radar, but best-Thrasher-ever Ilya Kovalchuk was traded to New Jersey this past week. This has led to some serious end-times talk among Thrashers fans, but I'm okay with it. His salary demands were such that signing him long-term would have blown out any chance at a deep team. They got one solid roster player (Oduya) and one who's likely to be solid (Bergfors). They got a prospect who was well-regarded up until he beat the shit out of some other guy, they got a pick. It's not a bad return. Lindros for half the Flyers deals don't happen any more.

The last Thrashers game I went to before this was a snoozer, and for one period this looked set to be awful -- thanks to the weather around DC, the team got back to Atlanta about two hours before gametime and they looked exhausted. It was a whole lotta suck. But then in between periods someone must have played positive thinking tapes, because jeezus, it was a different team that came out afterwards. Maxim Afinogenov, a guy I never really rate too highly, was flying. Tobias Enstrom was all over the place. Ron Hainsey and Zach Bogosian were solid. Evander Kane looked great.

The end, of course, was perfect: Bergfors scores the winner and gets first star (debatable whether it was really deserved, but who am I to critique a happy ending?). Nice big crowd for the game, too. I was expecting something south of 10,000 but that was the most packed I've seen Phillips in a while.

Hey, how about some really blurry photos? 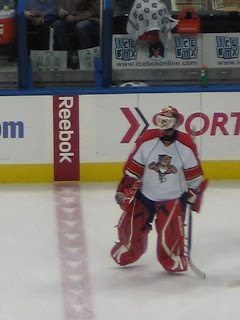 Tomas Vokoun, vaguely aware that he is being watched. 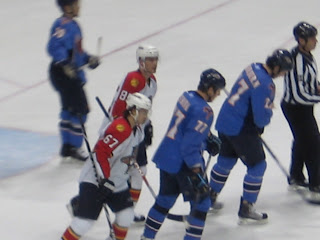 Special Post-Pessimist Association points awarded if you can figure out the common theme in this photo. 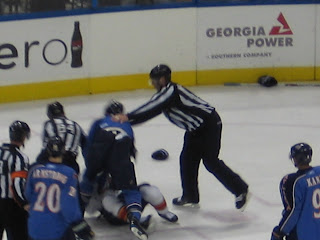 This one's for Tapeleg: Zach Bogosian beats up on a Panther. 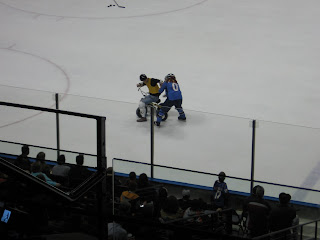 It's always fun to go through these photos the next day and determine the point when beer started affecting my photo choices. 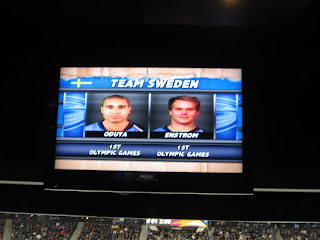 And it all culminates in a sad testament to the impact of alcohol: I start photographing television screens. The expression on Johnny Oduya's face can best be described as "I was on a Stanley Cup contender 48 hours ago."

#4 -- "The History of the Present" by Timothy Garton Ash

Despite my obsession with the former socialist bloc, I haven't read a lot of TGA's work. Not sure why -- I remember thinking "The File" was rather drab, and "The Magic Lantern" a bit self-centered. This, though, is (mostly) very good; essays tracing the region's path through the 1990s, after the fall of Communism. While the years leading up have been heavily covered, this looks at themes that aren't as publicized but ultimately may be more important -- the nations of central and eastern Europe searching for normalcy. The essays are printed as they were originally written as events happened, and while a few now seem outdated and irrelevant, for the most part the book is very insightful and has a new way of looking at familiar situations.
Posted by gsdgsd13 at 3:33 PM No comments:

Longtime PPA readers (all three of you) may remember this post, detailing my infatuation with a young lady. In retrospect it's not the most flattering portrayal -- reading it now, in fact, I'd say I sound a bit scared.

I'm happy to say that my feelings of impending doom turned out to be mistaken, and the Ski Bum (for that was her) and I became engaged not long ago. She actually read that post before we went out for the first time -- she'd managed to track down the blog and use it for insights (such as they are) into me. Being a crafty sort myself, I guessed from viewer stats that she was reading it... and I confronted her. And learned in the process that even if you're right, saying "you're reading my blog, aren't you?" to someone you just met sounds either narcissistic or psychotic.

Back to the present day -- things feel really good right now. I'm scattered and topsy-turvy as ever but for once it's for a positive reason. I always took the martyr's stance and said I'd never get married, I'd always be alone, and so forth. I'm glad to be wrong.

When the PPA started, it was intended to be about hockey and my dating life. Hockey went by the wayside just because it turned out I didn't have much intelligent to say; the dating part dropped off in large part because the Ski Bum came into my life. So you have her to thank for sparing everyone that.
Posted by gsdgsd13 at 8:39 AM 7 comments: