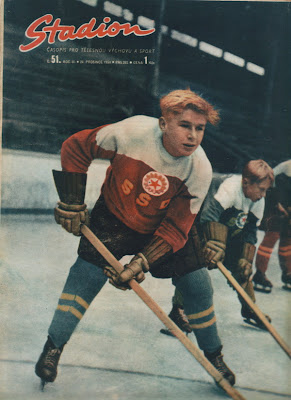 I think this is some early version of HC Sparta Praha. No clue what the "SSD" stands for, though. Taken from one of too many old Czechoslovakian magazines that I've got lying around.

I might have more to write about an aspect of "Soccernomics" later, but I'm hesitant to make any promises since I usually don't follow through. It's lighter fare than Kuper's other books; as you might imagine, it's applying Freakonomics principles to soccer. It's good fun, not too terribly serious, and I imagine it would make for some interesting arguments during the forthcoming World Cup if my knowledge of the game was a bit deeper.

"Final Solution" is a Sherlock Holmes homage by one of today's best writers. It's short and quick, and while the mystery isn't much -- I guessed the various twists pretty much immediately -- it's wonderfully written. I know there's a few Chabon books out there that I haven't read, and I should set about rectifying that.
Posted by gsdgsd13 at 8:26 PM No comments:


One of the unexpected joys about putting more years in the rear-view mirror: I've got enough music in my collection now that I can apparently go a few years without even thinking about an old favorite. Then when I happen upon that old favorite's albums while looking for something to throw on in the car, it's almost like a new discovery. This doesn't always work out for either party -- a recent reappraisal of "Century Days" reveals that it sucks -- but when it works out, it's tons o' fun.

I've been listening to Terry Allen a lot lately, for the first time in years. He sounds great -- he sounds better than he did when I first heard of him, on a review copy of the "Smokin' the Dummy"/"Bloodlines" reissue. first heard of Terry Allen in my previous life as a music reviewer, when Sugar Hill sent me the CD reissue of "Smokin' the Dummy"/"Bloodlines". In the way things come together afterwards, it turned out I was really familiar with at least one of his songs -- "Amarillo Highway," which I knew through the Robert Earl Keen version. Country with a wise unaffected feel, with nasal smartass and regretful lyrics by a guy that I'd say may be the best storyteller of the field. None of the all-American innocents of corporate Nashville, none of the hard men of outlaw country, Allen's tales are populated by lonely and desperate dreamers, drunks and speed freaks and pillheads. They hope for happy endings but don't get them.

I don't really have a feeling for how well he's known in music circles. He certainly doesn't cultivate a following; He rarely plays out (and if he goes beyond Texas/the American Southwest, it's news to me) and hasn't released a studio album since 1999. Plus, he's got theater and art pursuits to keep him busy (long, long ago I posted a pic of one of his sculptures here). I dunno if he's producing anything new or plans to in the future. Regardless: he's put out several good albums, and two that I'd just say hands down are great ("Lubbock (On Everything)" and the aforementioned "Smokin'"/"Bloodlines" double-up). If you've got any interest in the style, you owe it to yourself to check him out. So go to it!
Posted by gsdgsd13 at 9:28 PM 2 comments:

I seem to have a lot of ideas percolating, no time to actually write. That's probably the long-term story of this blog. So in the absence of any actual work on my end, two great pieces on two of my main men:

* Tony Judt gets a write-up in New York Magazine. The PPA is already the clearinghouse for anything written about Tony Judt ever, but this piece goes above and beyond. Find out for yourself. TJ has a new book out this week -- I'm anxiously awaiting my copy's appearance on my doorstep.

* via The New Vulgate: an interview with Ryszard Kapuściński's biographer. An acquaintance recently held forth on ol' Ryszard, saying that he felt that his work was largely invalidated by the news that he fabricated/altered some details. It troubles me; I've also been able to justify it to myself on behalf of, well, I really like Kapuściński and the work stands up on its own. I make allowances for him that I wouldn't make for lesser writers, and yeah, I'm a jerk. Anyway, this is tackled in aforelinked interview. And I really, really wish this bio was available in English.
Posted by gsdgsd13 at 11:59 AM No comments:

I'll have a bit more to say about this over the weekend -- I don't know why I decided to break the post drought 20 minutes before I leave for work. After enjoying "Neverwhere" it was only a matter of time before I picked up another Gaiman novel and I like this one quite a bit more. As I've probably said before, I'm not much on fantasy in general but some authors can get the mix of fantasy and real-world that I really dig. This works. Enormously creative, vast and sprawling, I spent a few days engrossed in this. I've already gone ahead and ordered "Anansi Boys" so my usual discover-overload cycle continues unabated.

Reading this tied in to something that's been on my mind about writing, too, but like I said -- 20 minutes to work. I'll hopefully tackle it tonight or tomorrow, unless it goes down the same black hole that my recent non-posts on Quicksand and Twin Peaks did.
Posted by gsdgsd13 at 6:41 AM 1 comment:

Last summer, when I was first starting to watch soccer regularly, I was struck by Aston Villa's uniforms: blue and red is hardly a novel combination, but it's almost always a navy blue (a la Rangers or old Milwaukee Admirals). At least in the U.S., the lighter/livelier shades of blue don't turn up often (in the EPL, I guess it's popular -- West Ham has a similar combo). I found it really off-putting at first but then grew to like it.

Same summer, I was researching something so dorky that I'm reluctant to discuss it here, and came across this 1959 photo of Swedish hockey club Malmö FF. I absolutely loved it: taking those same Aston Villa colors but making the blue dominant. I'd never seen anything like it and openly wondered (to my empty living room) why modern-day teams didn't do anything of the sort. (Malmö FF was eventually replaced by the Malmö Redhawks, and now have a black-white-red outfit that looks like one hillion jillion other teams.)

Some of you can probably see where this was going and are already shaking your heads: I saw the Avalanche's blue uniforms up close last night, and oh man, do I love them. I'd seen photos, natch, and hadn't been as anti- as a lot of people seem to be, but being there -- they look great. It's a darker blue than the Aston Villa and Malmö shades I'm touting, but regardless: the jerseys look classy. The preferred Avalanche "A" probably wouldn't work on a blue-oriented jersey, since the letter's borders have a lot of blue. That being the case, the Rangers-style diagonal "COLORADO" looks fine. I thought the old burgundy third jerseys with similar lettering were nice, but a bit too plain -- these look much better with the offset shoulders.

I've sworn off jersey-buying but I might swear it back on just for one of these. (Just a replica, not game-worn -- I've developed some sanity by now.) The question is who? I've already got a Hejduk. Svatos and Budaj probably won't be around much longer, and there are no other Czech or Slovak players. Break out and get a non-Slav? Duchene would work for a long while. So would O'Reilly. Chris Stewart may turn into a monster. Or, I could go offbeat -- get a Liles or Clark jersey and earn myself hostile and confused stares whenever I come back here to visit. Whatever. I need one of these suckers.

In other news, there was a game last night but I'd prefer not to talk about it. Good to see ol' Kamensky, though. I only saw one other person (besides me) wearing a VK 13 jersey last night, an older woman who looked like she was having a blast. Keep the faith alive, sister.

Dad, my sister and I had our pregame meal at old favorite Sobo 151, where I picked up yet another bar t-shirt. I now have more Sobo 151 t-shirts than I do Avs jerseys, and that's not even counting my Sobo hooded sweatshirt. When I bought that sweatshirt, you could still smoke in Denver bars, and it was so smoky (it had been hanging on the wall) that it took about a year to wash the stink out. You can't smoke in Denver bars anymore, thank god, but I noticed this morning that this new t-shirt smells like... smoked Czech meat. God I love Sobo 151. You Denver full-timers better appreciate it.
Posted by gsdgsd13 at 8:37 AM No comments: Perfect weather from my standpoint: it snowed a bit last night, enough to be pretty but not enough to make the roads hazardous; woke up early this morning to a cold and pretty fog; now it's sunny and wintry, cold enough to feel exciting, warm enough that I can stroll about with a couple light layers.

Driving downtown this morning, a bit north of Pearl, it struck me that the place looks a bit friendlier in the winter. With the tree cover stripped away and the mountains looming to the west, the low roofs make the city look a bit vulnerable. It feels like I'm seeing Boulder of decades past, a slightly-oversized ski town.

It's been many years since I read first this, then (in quick succession) the remainder of Chandler's work. In that time, two (unfair) things have happened:

* I've discounted Chandler's work a bit, particularly in comparison to Dashiell Hammett (why I felt I couldn't like both equally, I'm not sure). This is partly because it took longer to read all of Hammett's work, so it stayed fresh longer (and I've re-read "Red Harvest" since). And I read Chandler's work more-or-less in order, so I was left with the bad aftertaste of "Playback" and whatever that horrific book was that some other guy finished.

* I've watched the film version of "The Big Sleep" a bunch of times in the intervening years, so the romantic Bogart take on it has become the defining version for me.

Time to rectify that and give Chandler a good hearty re-read. I was driven to this after finally starting to read "City of Quartz" by Mike Davis: his chapter on noir reminded me that I really loved this book once upon a time. It's a beautiful nasty bastard of a book, surprisingly angry and tightly wound. It's been long enough and my memory was shaky enough that it felt like I was reading something new. New and very, very good.
Posted by gsdgsd13 at 2:59 PM 1 comment: