Sometime in the early 1990s, I woke up on New Year's Day with a nasty case of the flu (I was still straight edge, so this was flu, not "flu"). I lay around for a while feeling bad, then finally tentatively got up -- at which point I saw, on top of a stack of albums, Unsane's self-titled LP. If you're familiar with the band, you likely know what the cover is; if you aren't, believe me, you're better off not seeing this image. It was sufficient to push my already-delicate system over the edge, and throwing up ensued.

I've been listening to the first few Unsane albums repeatedly lately; basically all the stuff on Matador. There's a real break after "Total Destruction" -- I love everything they ever did, but from "Scattered, Smothered and Covered" on, they're much more... accessible isn't the right word to describe Unsane, but more polished. Listening to them at the time it all seemed like a natural progression, but now I just about think of Unsane as two different bands -- the scum rock version and the more metal version that showed up on Am Rep and Relapse. Both great, but if I had to choose, it's the early years.

Those first couple albums (and I'll count "Singles '89-'92" as an album, since I first heard all those songs on that collection) are just nasty. Vicious, evil stuff. Something like "Urge to Kill" might seem goofy on paper but hearing the delivery, man, that was kind of believable. Combined with the gruesome cover art, Unsane was the soundtrack to a complete breakdown of society, signifying a bad, fearsome world out there. The only other bands I can think of that were similarly off-putting in a real-world sense are Godflesh and Missing Foundation, but Godflesh was half great and half dull and I'd rather listen to cats mating than Missing Foundation. Unsane consistently delivered the goods.

#21 -- "Ashes and Diamonds" by Jerzy Andrzejewski

After reading "The Well of Lost Plots" lately, I was in the mood for more Fforde, and this was a natural choice -- it grows out of a throwaway line at the end of "Well" and starts off the Jack Spratt series, which continued with "The Fourth Bear," which again I read a few years ago. Funny as hell, sorry that there aren't any more Spratt novels out yet.

I've been reading "Ashes and Diamonds" off and on for a while and finally just knocked it off, and gosh, I need a hug. Who knew that Poland at the end of World War II was such an unfun place? People try to find some hope, but just end up in a world of shit. I've been reading a Bogart biography lately and it strikes me that this is kind of the anti-Bogart movie; everything branches off in ways that are the absolute opposite of how they would in, say, "Casablanca." Alternately, if I want to tie things together, Unsane would do a pretty good soundtrack for this book. A very good read, but make sure you're on an emotional high before you start it. There's an acclaimed movie version of this, which I'll check out sometime when I feel like I've been too happy.
Posted by gsdgsd13 at 12:51 PM 7 comments: 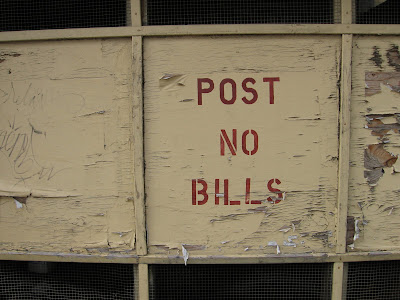 Well this has been fun: sporadic internet for about a week and a half now, and no real time to get it looked at. Finally did the other night and it's not the result of bad karma or crappy phone lines, but rather a modem that's about three years past warranty. So that's being taken care of. Finally.

A couple weeks back I did something I hadn't done in a long while -- went on a long walk, camera in hand. The target is below; an odd old house on Atlanta's 5th Street, one that's fallen on some hard times. I don't know what it was, though it must be something of note to have survived this long despite the disrepair. The back shows signs of either a fire at some point or renovations in progress, or perhaps both. Pictures below, book reviews follow. 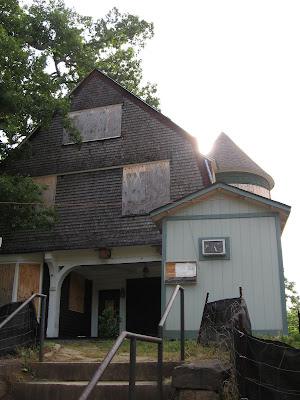 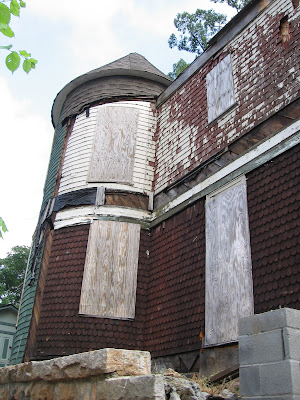 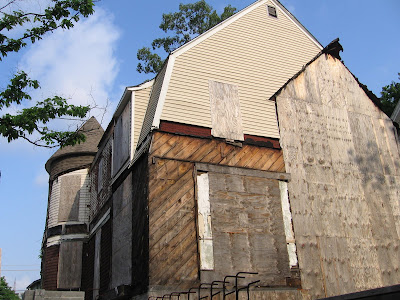 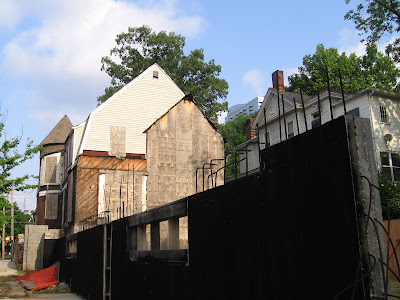 "M. Butterfly" is part of a large stash of books the Ski Bum lent me a few years ago, in an effort to help me to the then-elusive 50-book mark. It's just helping me along in 2010 instead of 2006. I remember the play in question being something of a big deal in the 1980s, for reasons I didn't grasp at the time. I don't read (or watch) a ton of theater, but this moved along quite nicely, with sensitivity and humor.

Jonathan Wilson is the Guardian's specialist in Eastern European soccer, and hey, guess what this is about. Wilson tours the former Soviet bloc to see how the fall of Communism has affected the sport, and by and large, free markets haven't helped things at all. It's quite well-written and interesting whether or not you're into soccer. And if you're me, it makes you want to head back to the area now. Of course, if you're me, just about anything has that effect.
Posted by gsdgsd13 at 5:23 PM No comments:

This is being written on an iPod Touch while I wait for my car to be fixed, so any bizarreness should probably be chalked up to the tempermental autocorrect. This could conceivably get me to post more. But a lot of things conceivably could, yet don't.

Went to the doctor's yesterday -- this is a wildly fun weekend, yes -- and as I emerged from the climate-controlled calm into the humid hell, for just a moment I felt invigorated. And I thought: "oh my god, I'm turning Southern." Thankfully the feeling passed and I was back to whining sweaty discomfort in no time.

Bouvier's book was touted as a sort of Middle Eastern Fermor, and that's fairly accurate. Not as lively and inspiring but interesting nonetheless. Drags a bit in the early going but picks up as he and his companions move east from Turkey through Iran and Pakistan to Afghanistan. It's a world none of us will see again.

Fforde's book is a blast -- a different series than the one I've read previously but still funny as hell. I went a few years after my first experience with him but I'll seek out some more.

Auto place's tv is now talking about Sarah Palin, so time to wrap this up and play music very loud.
Posted by gsdgsd13 at 7:09 AM No comments:

One of the side-effects of a job that frequently involves weird shifts and weird days is that you're caught off guard when you end up out drinking at a time when many other humans are out drinking. So it wasn't until some friends and I were unable to actually get to a bar tonight that we realized that today was Cinco de Mayo.

It has a little added impact this year because one of my several former states, Arizona, has instituted its crazy-ass immigration rule, which I imagine is dampening celebrations. It's a weird time. Some of my previously-normal-seeming high school friends are revealing themselves as being kind of nuts. The Phoenix Suns are mounting the most effective challenge to the law. I'm not sure what to think.

Speaking of not sure what to think, in "lines I never thought I'd type," the major reason I've not been blogging lately is not the usual laziness, but rather a semi-regular gym schedule. I actually worked out so hard that I vomited last week. If any of you have done that, I'd prefer not to know about it so that I can continue to feel really hardcore.

When not vomiting, I read a book:

This is tense, this is taut, this is all the words used to describe thrillers. And I continue to be impressed by anything where a character comes on stage and is fleshed out within a page. Why don't I let you know when I read one of JLC's books and I don't like it?
Posted by gsdgsd13 at 8:55 PM 1 comment: