If You're Crying In Your Beer You're Gonna Drown

Back in the Gretzky era of the Rangers, I took a kind of sick delight in reading the NY Post following NY losses. The combination of the "we are destined to win" mentality with the team's failures, plus the Post's trademark restraint, made for hilarious reading. The arrogance of Larry Brooks (not a bad writer, but insufferable) and the incoherence of Jay Greenberg (a bad, bad, bad writer) added to the fun.

It's with a similar grim glee that I anticipate the covers of tomorrow's English tabloids. The extremism with which they've greeted every England UK win, loss, or tie (or even group drawing) means great times for anyone who likes a journalistic trainwreck. The disallowed Lampard goal will double the fun, with a bunch of people already suggesting that the screwup turned the match (though anyone who thinks allowing the goal would have spurred England to hold level with the Germans for 90 minutes has been huffing paint). Earlier a Sun article -- now either gone or just moved off the front page -- made great mention of the fact that the ref in question was South American. Because English refs don't miss things.

Really, to anyone watching this tournament with clear eyes, it was obvious that this was about as far as England could go. They were better than the USA team, but not a match for your Brazils, your Portugals, your Spains, your Germanys. Weak in goal, weak on defense, slow. Simon Kuper (who had a good article on the team a few days ago) tackled this in "Soccernomics" -- specifically that England aren't really among the elites, and are kind of punching above their weight in world soccer.

Kuper's writing is far removed from the world of the Mirror and their ilk, though, so I imagine we'll see plenty of Fabio's failure/cheating ref/dirty hun talk in the days ahead.

I'm back in Colorado for a week now, and anyone who suggests I don't deserve this vacation will get some hard looks. Weather is grand, beer is cold, and got to watch England-Germany at Sobo 151 with the mighty Brian Ed today. This is a good place.

I got this right after reading "Sewer, Gas, and Electric" last year, but held off because I anticipated surefire disappointment after reading "SGE." Delayed pleasures and all that, but my prediction was extremely wrong: this is better. It's a tightly-wound trip through paranoia and delusion, often shocking. I think I'm too jaded to be caught off guard by twists but this got me several times. It's got some of the humor of the previous book, but it's more a dry black humor rather than the previous laff riot. It's fantastic and if I go back to Atlanta without buying all his other books, it'll be quite an achievement on my part.
Posted by gsdgsd13 at 7:10 PM No comments:

Between this and this, you've just become the PPA's favorite hockey player, non-Avalanche/Thrashers/Kloucek division. Seriously, I hope the kid does great.

I think there are only a few things the PPA formally endorses -- beer, Albania, Tomas Kloucek, penguins -- but add kdur.org's "Rightness Wronged" to the list. It's on 11am-2pm Eastern every Saturday, it's streamed online, it's hosted by longtime friends-of-Greg KWK and Rags, and it's fucking fantastic. The two gents in question have an ear for the most cathartic music out there and listening for just a bit this past weekend felt great. And it made me want to get back to Colorado posthaste.

Which, happily, I am -- about the time the show's airing this Saturday, in fact. Life's been nothing but work and World Cup -- the two often intersecting -- so I look forward to two weeks of putting concerns and responsibilities to the side.

I haven't posted much lately. Like I said, all work and World Cup (and Twitter -- if you're on it and I somehow don't follow you, look me up at twitter.com/gsdgsd). I've read a few books -- #24 "Bogart" by A.M. Sperber and Eric Lax, #25 "The Fall" by Albert Camus. "Bogart" a good diversion, and good to read it after it spent 10+ years on my shelf, but film biographies aren't really my thing, even when it's Bogie. As for "The Fall" -- some things that I really liked when I was 20 just don't work years later. I re-read "The Plague" a few years back and dug it, but geez, this just left me cold.
Posted by gsdgsd13 at 5:43 PM 1 comment: 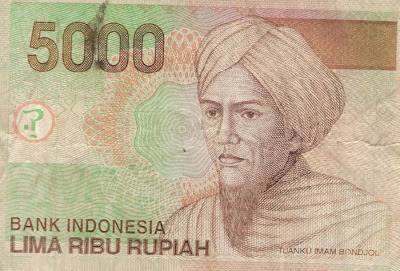 Whenever the Ski Bum travels sans me, I ask her to bring back paper money. Not sure why, as I don't collect it, but I always get a little charge out of seeing the overseas bills. Especially when the people pictured sport facial hair like this fellow. Doing a little Wikipedia searching, he was a leader of 19th century resistance to Dutch colonization of Indonesia. He died in exile at the age of 92, never knowing that his facial hair would later inspire every bouncer in metro Atlanta.

Back in college, my friend Jon and I were devotees of the book "Generation Ecch," which mocked just about everything in the very-mockable mid-'90s, and had the bonus of Evan Dorkin art as well. Then a few years back, I heard about this book, which sounded right up my street (though despite that, and repeated recommendations from Tapeleg, it took me a long long time to get it). It wasn't until I finally ordered it a couple months back that I realized that the author of ZR was the co-author of the long-ago "Generation Ecch," a connection that I found both kind of cool and a tad unsettling, perhaps an indicator of some great conspiracy.

That's all neither here nor there. I finally read it and I'm happy to say that it's one of the finest hockey books I've read, one of the very few that boasts real writing skill in addition to hockey knowledge. The opening description of a goal captures the moment perfectly; the main narrative, as Cohen travels along with the lower-minor league Austin Ice Bats, is honest and funny. In the past I've bemoaned the relative lack of great puck writing in comparison to other sports, and I'm glad to be able to add another hockey tome to the "recommended" shelf.

World Cup time -- I watched both matches Friday at work but could only give them half my attention, missed South Korea-Greece, watched enough of Argentina-Nigeria to know that we're going to be treated to a whole lot of overblown "what's wrong with Lionel Messi?" talk (and enough to know that even when they're on TV, vuvuzelas aren't good for a hangover), but the first match that's getting my full attention is England-USA. It's my occasional opportunity to get my patriot on, and I will, as much as possible (I'll be wearing an Albania jersey, since I lack a U.S. one -- I'm a bad American).
Posted by gsdgsd13 at 11:55 AM 1 comment:

I remember hearing an urban legend/true story about a Bay Area guitarist who was asleep inside a house when a bug bomb went off, and afterwards was perhaps ot-nay so art-smay, and then went on to sing for Rancid. I'm reminded of that after taking on a bathroom-prettifying project yesterday and using about half a canister of "Goof-Off" in a small, poorly ventilated area, and then finding myself talking to rocks and mailboxes and seeing lots of pretty colors as I walked around later. My head stopped swimming a bit later on but even this morning, chillingly, I had the song "I Will Try" by Insted (a band I haven't listened to since I discovered the joys of beer) lodged in my head. I finally dislodged it -- by turning my brain to "Survival" by Outspoken, a band I never liked, even in my straightest of straight edge days.

So let's pretend that I was going to write something super brilliant, but instead (insted) I killed off all those poor brain cells and now I'm just gonna show you old Czechoslovak ads, from that same Zetor Brno hockey program that I've mined in the past. 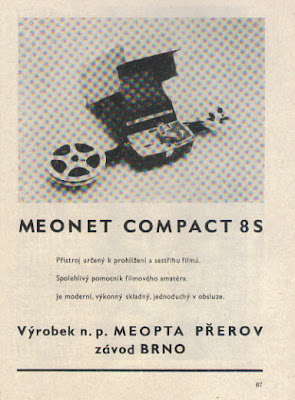 I don't know why this blows my mind so much (Goof-Off?) but this is apparently a film viewer/editor of a type I've never seen. Not that I'm an expert. But the whole thing, the way it's put together, just looks strange. This scan is awful -- my scanner doesn't deal with grays well, apparently -- but that's a viewing screen underneath the little hood. I dunno, maybe this sort of thing was common all over '60s-'70s America, but I never saw anything like it. 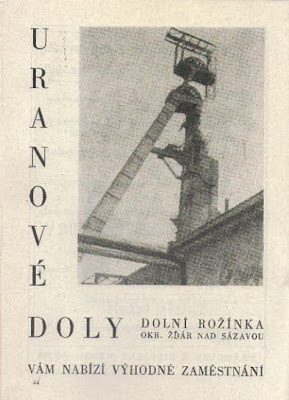 If you had asked me in the early 1980s to "draw what Communism looks like," my subconscious would have picked this image up and converted it into poorly-rendered scratchings in a Big Chief tablet. This is, as far as I can tell, an ad for a uranium mine. I don't know if it was a big draw in the area -- "bring your kids to the uranium mine!" -- or if this is just a "be proud of your uranium mine" type of thing. Also curious: it's in Zdar nad Sazavou, which according to Google Maps, is a good hour away from Brno. I think it's still going strong, if this link right here is the same place. I'll add it to the places to visit list.

Trivia: Zdar nad Sazavou is the birthplace of not one but two members of the recently-World Championship-winning Czech hockey team, Tomas Rolinek (who was the captain) and Petr Vampola. So the message is, I guess, if you want your kid to grow up to play hockey, expose them to uranium. Or "Goof-Off."

This came out of a discussion with a friend about the Dayton Accords and the troubled federation that is current Bosnia-Herzegovina. It's probably overdue that I read this; I'm just not crazy for politicians' memoirs. This is certainly self-serving, though not as bad as it could be, and Holbrooke gives some great insight into the negotiating process and the way seemingly minuscule issues tangled things up. I came away (as was the intention, I imagine) thinking that even the flawed Dayton deal was quite an achievement.

It needed a better editor; it's a bit repetitive and occasionally disjointed. And there's some score-settling involved -- the French, the Bosnian Serbs, the Bosnian Muslims, and Boutros-Boutros Ghali all come off looking pretty bad. Eventually I'll hunt around to see if there are any memoirs from any of those sides, or anyone who thinks Dayton was the wrong way to go in the first place. Despite its flaws, this gave me some new insights into something I'm pretty passionate about, so score for that.

Also: it includes Slobodan Milosevic hanging out in an Ohio sports bar, and where else will you get that?
Posted by gsdgsd13 at 1:09 PM No comments:

Having read this, and taking into account the recent pattern of severe misbehavior, I've decided that Arizona doesn't deserve nice things and I am officially withdrawing my long-running support for keeping the Coyotes there. Go ahead, Winnipeg, they're all yours. Just don't start pulling racist shit.

However, we need a little balance to keep the "Make it Seven, Eh" dorks from getting cocky, so phase two of my plan is to move the Calgary Flames to Portland. The Flames are the NHL's blandest team and no one outside of Alberta is aware that they exist, so the impact should be minimal. They could even remain in their current division. This will also serve me well if I should move to the Pacific Northwest at some point.

Easy-peasy. I'm available for consulting on all of your problems, and I charge reasonable rates.
Posted by gsdgsd13 at 9:27 PM No comments: