Under the heading of shouldn't mean something but it does: after 11 years in Atlanta, I've given up the old 303 (Colorado) area code in favor of 404 (Atlanta). It's not voluntary; I got an iPhone and they wouldn't let me keep the old number. This all feels rather harsh, the severance of another link with the homeland. But -- I kept a 303 number through more than a decade out here, so perhaps giving in and going to a 404 number will free unseen bonds, and let me head back to Colorado. That's how it would work in fantasy novels, anyhow.

I have read books in the three weeks of radio silence (illness, work, illness, ennui). Not many, though, because one was longer than hell. 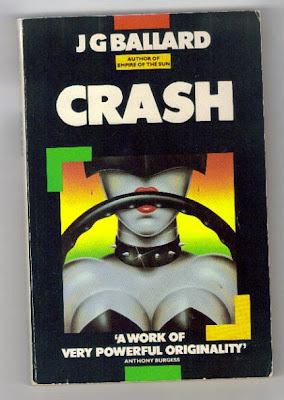 So, "Crash." Long overdue. Notorious. And, god, reading it makes you want a shower, then another. Which isn't to say it isn't captivating -- it is. But I don't know that I honestly enjoyed it. I can't really recommend it, but it is an experience.

One note: I'd gone 20 years or so assuming that Government Issue's "Crash" -- sung by Ballard-fan Jay Robbins -- was about this book. But they don't seem to be connected at all. Another youthful fancy shot down.

Shorter and easier review department: "Nixonland" is probably the best book I've ever read on modern (or, what the hell, non-modern) American history. Why don't you do yourself a favor and read it?
Posted by gsdgsd13 at 9:43 PM 2 comments: 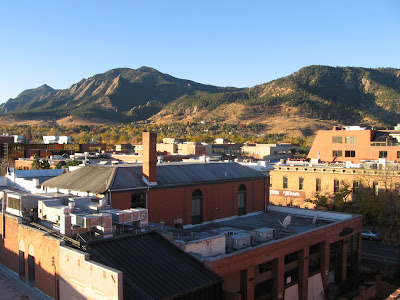 There's a corner in my favorite coffee shop here that seems to have a perpetual smell of patchouli and body odor, even when it's empty. Yesterday I sat in it and worried constantly that it was me; today I sat elsewhere, but walked by and it was still there. I think perhaps it's a little haunting, Amityville or Shining-style -- the miasma is all that remains of the souls of Boulder's old hippies.

The usual bit: I'm in Boulder, I want to move back right now. But there's a feeling, for perhaps the first time, that I'm something of a sucker, that coming back here would thrust me into a young man's game that I'm ill-equipped to play. I'm not ambitious in the traditional sense. Right now, I'm less certain than ever what I want to do with my life. Usually, a trip back to Boulder makes me feel like I can do anything. This time, I'm just finding myself more confused and aimless (albeit in a content way).

Money and the trappings of success aren't really important to me. On the other hand, I don't seem to have it in me to be an ascetic, and even if I get to that point I still have to worry about health insurance and the pragmatic parts of life. I don't want to get caught up in materialism but I also don't want to live under a bridge.

This is an aimless ramble; this is mostly what I'm capable of these days. Confused mental meanderings. At least this week I can do it in Boulder.

So, huh, "Neuromancer." One of those books that I shoulda read a long time ago. And... I'm not crazy about it. Didn't really hold me. I'm sure that aficianados of the genre could tell me why this is way better than "Snow Crash" but I'll still take the latter. Didn't get into "The Man in the High Castle," didn't get into this -- cult literature and I have a rocky relationship.

"A Dangerous Place" is much more my thing -- Reisner's the writer of "Cadillac Desert," which I loved a bunch once upon a time. This was his final book (he died before his completion). It's a last warning about California's future, detailing how the combination of overextended water resources and major cities built on fault lines will eventually lead to utter disaster. He closes with a speculative piece, detailing just how the disaster would play out, and it's very realistic and plausible. It's a pity he wasn't able to write more.
Posted by gsdgsd13 at 10:47 AM 1 comment:

Sorely needed, I'll tell you that.

Emerson's book is an interesting oddity -- I found it frustrating and dull at first, and maybe throughout, but it kept me hooked. It's oddly dreamy and quietly funny, the story of a well-meaning American who channels twin obsessions -- her slain brother and Graham Greene -- into attempts to help the world's less fortunate, whether they want it or not. It isn't like anything else I've read, and while this isn't exactly a wholehearted recommendation, it may be worth your time.

Unfortunately, "The Hills of Adonis" isn't. I'm a big Thubron fan but this -- his first book, I think? -- is tedious. He's strolling through Lebanon on the eve of the Six-Day War, and seems wholly uninterested in the modern land; his concerns are two millennia old. Ok, fine, but he doesn't make it terribly interesting. I'd recommend just about everything else he's written, but not this.

"The Hot Rock" and "Why Me?" are two more on the Dortmunder checklist. These are two of the earliest, and two of the weakest. Still funny, natch.
Posted by gsdgsd13 at 5:48 PM No comments: