Amid all this, the end of the NFL lockout comes as not just a relief but an overwhelming joy. About a month ago I told the Ski Bum that I'd be fine if the NFL lockout continued through the season, that I'd use the time to do productive things. She looked at me askance, and rightly so. The past 48 hours have been a blissed-out blur of reading ESPN blogs about guys I've never heard of on teams I don't care about, wondering where Kevin Kolb will end up, stopping my fingers just short of buying 16 John Elway throwback jerseys on eBay. I'm excited about the forthcoming Premier League season and Liverpool's possibilities. I'm excited about the forthcoming NHL season and the Avalanche's possibilities. I am absolutely frothing rabid about the upcoming National Football League season and this in a year where the Broncos will be lucky to go the 6-10 that Vegas is predicting. I'm thinking about taking some days off to go visit Falcons training camp, even though that means sitting outside on an August Georgia day developing heat prostration and watching a team I don't really care about.

Should I like football this much? It's a stupid and meaningless question, yes, but that doesn't prevent me from asking myself from time to time. The whole overblown spectacle surrounding the sport, the mashup of a WWE event and one of the crasser Republicans' campaign rallies, is anathema to quiet bookish me. There's the casual response to the potentially life-ruining violence, there's the casual racism that's let much of the fan base dehumanize Vince Young, to name one. The players generally aren't too likeable, the fans are often worse (part of the reason that I've never sought out a Broncos bar here is that it lets me maintain the fiction that Denver fans are smarter/classier than the rest). It's not a sport with much of an intellectual tradition -- Paul Zimmerman (past) and David Roth (present) are the only writers on the sport that have impressed adult me (America's most popular sport should have more great writers on it, shouldn't it? Roth knocks it out of the park in the Awl, but other than that there's no one that I feel like I have to read, just the SI types that I struggle to on Monday morning because I'm reluctant to accept that the football weekend's over).

But forget all that. I'm certainly able to. Come September 11th, I'll be getting into a neck vein-popping state over failed third downs. I'll be performing ethical contortions to justify rooting for the unsavory types on my teams (a little easier for me, at least, since I don't root for the Steelers). I'll be Tweeting incoherent pre-verbalisms when Knowshon Moreno fumbles. I'll be routinely drunk and eating awful shit on Sunday afternoons.

Why? I don't know. American football's the best sport for tv, and combined with its once-a-week schedule, it seems more like an event, a happening than other sports. Childhood conditioning, too, I guess -- in our largely secular household, the NFL was the premier Sunday ritual, and my childhood happily coincided with the local team being pretty great. And for all the missteps, the NFL does know how to build up drama -- NFL Films may be frequently hokey, but I'm not ashamed to admit that I get a chill any time I see its grainy slo-mo, even if it's a presentation of "The Detroit Lions: The Less-Bad Years."

So bring on the spectacle, bring on the stupid. Bring on Frank Caliendo and Jimmy Johnson and Tim Tebow talking earnestly about believing in yourself. It isn't pretty, it isn't classy, but good lord I cannot wait for football to start.
Posted by gsdgsd13 at 8:39 PM 1 comment:

One afternoon I went to U Fleků, spurred on by the "Rough Guide to Prague" descriptions of ambrosial beer and a beer museum in the back. The beer was indeed ambrosial, although back in 2001 the craft beer explosion hadn't fully hit and I was still willing to drink things like Heineken, so my perceptions may have changed since. When I went back in 2006, the bar was full of drunk loud Germans so I passed it by in favor of a club where bad folkies were playing to hippie American expats.

The beer museum, though: I asked an employee about it, me with no Czech and he with limited English, and was led back into a courtyard. He indicated that he needed to get the fellow in charge of the museum -- he also indicated that this wasn't something that came up often. I waited, and waited. Finally, he reappeared -- and bear in mind that it was about 4 p.m. -- shaking his head. "Still asleep," he said. "Still asleep."

Pretty slick, wasn't it, how I spent all of June nursing this blog back to life, then spent the first few weeks of this month holding a metaphorical pillow over its metaphorical face? Yeah. I've been working on something else writing-wise, which will hopefully bear fruit soon, and I've been busy as hell regardless. To sum up: Colorado was lovely, and everyone who doesn't live there is an idiot.

Books. I did continue to read.

I'm thoroughly in the bag for ol' Colson now, and I'll read anything he writes, even if it's on the disappointing Grantland site. This, man, this is so good. A book about the teenage years that doesn't feel romanticized or idealized: dead-on funny and heartbreaking. My memories of childhood summers stem from the two weeks we'd spend at a Michigan lake -- this felt perfectly accurate, and wonderfully written.

I felt like I should pay tribute to the late PLF somehow, but in retrospect I probably shoulda just read "A Time of Gifts" again. This has some beautiful parts, but really, unless you share Fermor's rapturous love of Greece -- and it exceeds my love of all things Slavic -- a lot of this will seem over the top.

Some of this feels way too cute, some of this feels like genius that's a few levels above me. On finishing it, I was torn between a sneaking suspicion that I'd just wasted a few days, and the desire to read this about two more times to sort it out.
Posted by gsdgsd13 at 3:24 PM No comments: 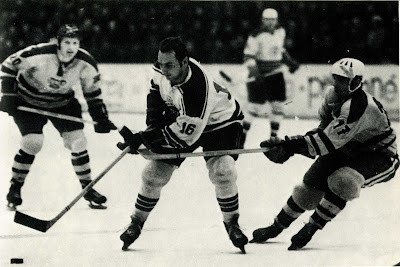 Sad news from the Czech Republic -- media reports say that Jaroslav Jiřík, once of the St. Louis Blues and the first Czech-trained player in the NHL, died in a small plane crash today.

His North American career was minor -- three NHL games, no points, most of the season spent in the minors -- and he went back to Czechoslovakia after one year (later saying he should have given it more time). His career in Europe was pretty magnificent, though. Nearly 20 seasons with Kladno and Brno, more than 300 goals, three Olympics and seven World Championships. Rest in peace.

Notes From the Patio

I'm on vacation, I read a lot. My parents have a nice back patio that's very conducive to this. Briefly:

A series of brief histories on some of the world's biggest liquor brands. The style's not really my thing -- written by a Playboy editor, nice back cover comments from Maxim, this is bro-lit. Bill Simmons on booze. It's fun though, and made me feel like I should drink more bourbon. Plus learning what an awful human being the real Captain Morgan was makes those horrid "Put a little Captain in you" ads a bit easier to take.

Some time back, I was mightily unimpressed with one of Thubron's earliest works. Reading this gives me a bit of perspective on that, though, and if I look at "The Hills of Adonis" as a rookie effort in the process that eventually allowed Thubron to write something this wonderful, well, then, it served a purpose. There isn't a lot of great travel writing around today, but Thubron seems to get better and better. "Shadow of the Silk Road" takes him along the old route, from China to Turkey, and it's the best book yet from someone who's written his share of greats.

Good fun here. I'm still waiting for one of Gaiman's novels to knock me out, and it hasn't yet -- his characters are a bit too templated for me -- but they're all entertaining, rollicking, exciting, whatever words you want to use. In my easily-distracted state, it's nice to find a book that hooks me enough to be read in one sitting.

The Eagle Has Landed

Interrupting this holiday silence with breaking news: Tomáš Klouček has latched on to a team for 2011-12, signing on with HC Lev Poprad. This is the new Slovakian entry in the KHL, and it's looking like a haven for Czechs and Slovaks who want KHL money while staying closer to home. Every player listed here is either Czech or Slovak, including long-ago Avalanche washout Václav Nedorost.

This is excellent news (though not as excellent as my hypothetical Klouček-to-Brno deal). HC Lev immediately becomes the shining star of the KHL. Everyone can get back to enjoying the holiday now.
Posted by gsdgsd13 at 3:14 PM No comments:

Labels: czech defensemen that i like but no one else is really into, hockey, kloucek

That Life It Is Contagious 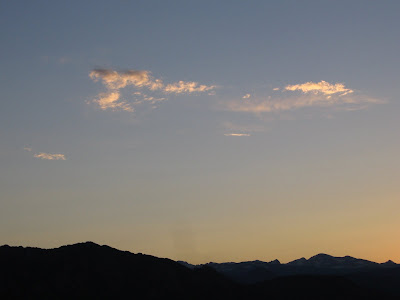 At the risk of jinxing myself, life was already feeling kind of good before I came out here. Now? Now I feel unstoppable, able to bench press cars, ready to star in a Hollywood blockbuster. Colorado will do that to you. Well, perhaps not you, but definitely me.

This morning began with me on my parents' back porch at 7 a.m., drinking coffee and writing in 70 degree temperatures. Two hours later, I was at 10,500 feet, clambering over a 10-foot-deep snowdrift to get to a rickety bridge over a burbling stream. By 1 p.m., I was back on the porch, 70 degrees changed to 90 and coffee changed to beer.

It was all lovely. Colorado, why you gotta be so great? 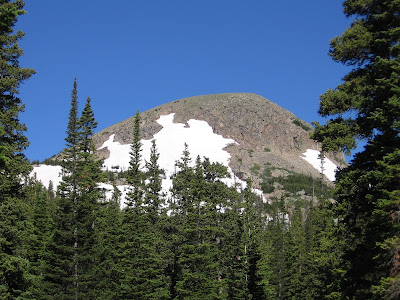