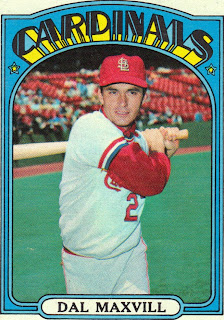 "I'd hate to see you throw a knuckleball 3 and 2 to a guy like Maxvill, if the bases are loaded and a walk means your ballgame."

That's 1969 Astros manager Harry Walker, speaking to Jim Bouton, quoted in "Ball Four." I read it in 1985 or so, and immediately cultivated an image of Maxvill, a player I otherwise knew nothing about: a canny player, the kind of thoughtful hitter who would make you pay if you threw him the wrong pitch at the wrong time. I vaguely wondered why I hadn't heard more about him in all my baseball reading.

That image stayed with me until I came across this card a few weeks ago, and read the back: I'd interpreted Walker's words the wrong way. Dal Maxvill hit .175 in 1969.

This isn't becoming a card blog, but I felt like I needed a palate cleanser after that Hadl airbrush. This is just a beautiful card.

The 1972 Topps design is hit or miss for me -- I can't tell if they were going for their idea of a modern-psychedelic design, or their idea of a throwback-1920s art design. Or both. Sometimes it's really gaudy. But other times, when they keep the colors sedate, they can be lovely. Exhibit A: this card. It screams baseball. The photo is great -- the Cardinals' uniforms are so timeless that this could be any time from the 1930s onward. Turn it sepia and you could pass this picture off as a member of the Gashouse Gang.
Posted by gsdgsd13 at 7:56 AM 1 comment:

Madness lies within 1970s sports cards. You pick up a card that at first glance looks okay -- but the slightest uptick in attention to detail and you notice something seems off. It's been airbrushed. You think ok, that's not a bad airbrushing, but then you can't help but keep looking, and all the little flaws leap out at you, and eventually you've spent 15 minutes critiquing a football card that came out when you were four years old. 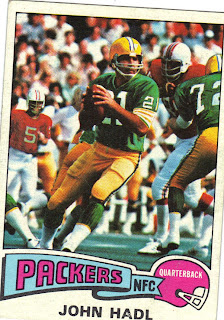 There are a few quarterbacks that have earned themselves a classification in my mind: guys who retired a few years before I came onto the football-watching scene, who seemed to get good press but didn't end up in the Hall of Fame or in the Super Bowl, my two main avenues of exploring the NFL's past. Roman Gabriel, John Brodie, John Hadl (Billy Kilmer is a semi-member, but he played in a Super Bowl). I know two things about Hadl: he played for the Chargers for a long time, and his last name looks like it might be Croatian. Oh, a third: his 1975 Topps football card probably drove an airbrusher crazy.

Not sure why they had to resort to the airbrush here -- he went from the Rams to the Packers in mid-1974, so there was ample time to find a new photo or just dig out a cropped head shot. But no, Topps stuck with this picture (it's a good one, you must admit). At first it looks pretty normal -- you have to scrutinize things like numbers to see the problems. But then the big one hits: both teams are wearing home darks. Never happens. Once that clue's there, you can see all the little things: Hadl's helmet is a little off (though really pretty good -- I've seen airbrushed helmets that looked like Sputnik), the deformed #72 on the blocker, the lines on Hadl's socks.

But then the thing that drives me absolutely crazy: #5, there, on the far left of the card. Why did a PATRIOTS player have to be airbrushed in? With his deformed hand and the helmet that looks like a six-year-old drew it? What's the point?

The point, I guess, is that the Rams' bench was on that side of the field and there must have been a clear white jersey standing there, maybe with a dark blue helmet. So it was necessary to do something. But why make it a (very weird-looking) Patriots player? It's that detail that's the breaking point, the thing that keeps me coming back to this card. If it took that much effort, why not just dig up a Hadl headshot?

After all that work, Hadl's time with the Packers was brief and disappointing (details here, including info on the Ricky Williams-esque trade that brought Hadl to Green Bay). Airbrushing lasted a bit longer -- Topps kept doing it on football and baseball cards 'til 1981 or so, and hockey through about 1990. The anonymous airbrusher, I hope, went on to bigger and better things. After that card, he deserved them.
Posted by gsdgsd13 at 8:47 PM 3 comments:

It's still steamy, still bordering on unbearable, but now the knowledge that it will end becomes more tangible. Mornings are refreshing, not as heavy with heat. It's still a sweaty business just existing, but it's not too long before I can bring the long-sleeve t-shirts out of mothballs. Stepping out of work to the sounds and smells of a Falcons preseason tailgate the other night was bracing, exciting. It felt like the start of something good.

I've said it many times before: autumn is my favorite time of year here. This one promises to be good.
Posted by gsdgsd13 at 9:02 AM No comments: