#8: "Prague in Danger" by Peter Demetz

A three-pronged history here, on occupied Prague in World War II. Prong one is a straightforward history of the German occupation, and the subsequent collaboration and opposition. Prong two is a reference guide to the arts scene in the Czech capital during the war -- theater, music, literature. Prong three is made up of Demetz's own memories, growing up as a young man during a confusing time. While the straightforward history is valuable and informative, it's Demetz's story that makes the book. Often wry and always (sometimes uncomfortably) honest, I could have read much more of his life story.
Posted by gsdgsd13 at 10:23 PM No comments:

#7: "The Great War for Civilisation" by Robert Fisk

Probably the strongest and most important book that I've read about the Middle East. Clocking in at well over a thousand pages, it's not going to be for everyone, but it's worth the work. Fisk has had a front-row seat to just about every regional development since the 1970s, so these are the stories of a witness rather than a historian. Recommended without reservation -- this is excellent.
Posted by gsdgsd13 at 8:28 AM No comments:

The things you find online: this was a pickup for a few bucks on the Swedish version of eBay; it's something I would have been salivating over for 50 times the price. 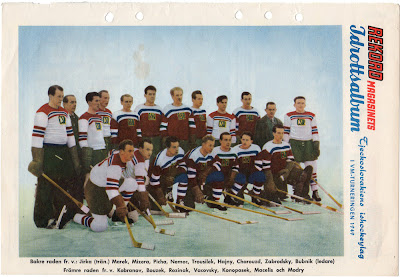 It's a page from a 1949 Swedish magazine, and those fellows there make up the Czechoslovakian national team. They won the World Championships that year, their second title in three years. Thanks largely to this event, they wouldn't win again for more than two decades.

A year or so after this photo was taken, Jirka, Hainý, Bubník, Kobranov, Roziňák, Konopasek, Macelis, and Modrý were all in jail. Marek had defected to the United States. Czechoslovakia didn't do better than bronze at the WCs until 1961, and didn't win gold again until 1972. Now, more than 60 years after this photo was taken, Zábrodský, Bubník, Kobranov, Marek, and Vacovský are the only players still alive.

I've always had a fondness for this film, based almost solely on the stunning opening scene of a heist in a closed-down holiday town. Watching it anew, the cracks show a bit, and I'm a little less surprised that this is the only major Jean-Pierre Melville film that hasn't got the Criterion treatment yet.

Part of the problem is that we're supposed to see Alain Delon as the leading man here. Melville was always more comfortable with the rogues as leads -- Roger Duchesne in "Bob le Flambeur," Jean-Paul Belmondo in "Le Doulos," Lino Ventura in "Le Deuxiemme Souffle" and (in its way) "Army of Shadows," Delon in "Le Samourai" and "Le Cercle Rouge." In "Un Flic," Delon as good guy cop doesn't cut it -- there are attempts to lend him some gravitas, either through meaningless pronouncements ("It's only when the town's asleep that I can do my work," a line that means nothing to the film) or violent behavior, all of which seems forced. But when you turn it around and take the rogue -- Richard Crenna, here -- as leading man, "Un Flic" starts to fall into place. Crenna's soulful and solid, and you'll wonder why Catherine Deneuve is torn between him and Delon.

The plot's kind of lousy -- the aforementioned triangle has no heat until the film's final moments -- but there are saving graces. The helicopter-assisted train robbery is Melville at his finest, with the scenes of Crenna calmly going about his business, slowly switching from action gear to smoking jacket, working perfectly. And it may be Melville's most visually satisfying film, whether in downtown Paris or the French countryside -- or that storm-swept coast in Saint-Jean-de-Monts. Whatever the film's flaws, that will always remain in my heart.
Posted by gsdgsd13 at 10:41 PM No comments:

The hunt for the Scandinavian mystery that will make me happy continues. A friend recommended I check out Mankell's Kurt Wallander books -- he said they really start to get good about five in. This is the first and it's not bad, but didn't quite knock my socks off. Wallander's an interesting, flawed character, and Mankell sets it against a backdrop of the tensions causing conflict in Sweden at the time of writing (20 years ago, now). Like all the Scandinavian books (isn't there a good snappy short term for this?) I've been reading lately, it's wonderfully atmospheric and descriptive. The mystery itself is a bit unexciting, though -- the plot meanders about a bit in a haze of red herrings and Wallander's sadness, then gets tied up pretty quickly at the end. (A similar problem to "The Darkest Room" -- perhaps something in the Swedish national character?) Still, though, nicely written and I'll seek out subsequent books.
Posted by gsdgsd13 at 2:06 PM No comments:

Gare Joyce wrote an article about the Canadiens' struggles for Sportsnet not too long ago. It made a lot of people unhappy. Some for some legitimate reasons (historical errors), some for less legitimate reasons (oh god someone said something bad about a team I like). I enjoyed the article. For all its faults, it was interesting. I haven't read much by Joyce over the years, but what I've read has been thoughtful, the work of someone who thinks about hockey and its meaning beyond "the sport makes me feel good about my country/my city/my team/me."

That alone puts him in rare air. There's a lack of good hockey writing compared to other sports -- without trying I can find a mess of good stuff about basketball, a sport I don't really care about, but lasting hockey work? There's "The Game," Jason Cohen's "Zamboni Rodeo," Kent Russell's sporadic work at N+1. That's about it for real high-quality stuff. There isn't much coming out regularly in the way of good hockey writing -- the Guardian's soccer section has more fine writing in one week than the general hockey media manages in a year. The Classical's great on just about every sport, but its limited hockey coverage thus far has been of the "anthropological study of this mysterious 'hockey on ice'" stripe. Maybe it's difficult to write well about hockey? Maybe good writers aren't drawn to hockey?

So back to Joyce. The article was interesting, thoughtful; I was glad I read it even though I don't care a lot about the Canadiens beyond finding their fans pretty entertaining (seriously, Leaf fans: be less like Leaf fans and more like Hab fans). It was interesting enough that I clicked straight over to Amazon and bought the least-outrageously-priced copy of "When the Lights Went Out."

The book centers on the "Punch-up in Piestany," the bench-clearing brawl between the Soviet and Canadian juniors that ended with both teams booted from the tournament (costing the Canadians a shot at the gold medal, though it was a pretty remote shot). After the 1972 Summit Series and the 1980 Olympics, I'd guess the P-UIP is one of the most famous international matches (at least for North American audiences). It certainly seems to be the source of considerable jingoism.

Thankfully, Joyce mostly avoids that. He's sympathetic to both sides, and gives Russian voices heavy play. He pushes the "robotic Soviet" myth out of the way early (and I think he gets through the whole book without referring to Russians as "enigmatic" -- GREAT JOB! Now follow suit, everyone else on planet earth). Alex Mogilny is the most interesting person in the book (alas, with perhaps the least to say about the Piestany game).

The players on both teams, however talented, were still just kids, and they've got Joyce's sympathy. The Canadian teens were largely abandoned by the power structure that was supposed to be supporting them, and Joyce does a fantastic job showing just how strange and confusing this was for the kids.

There are a couple oddities, things that aren't expanded upon: at one point then-IIHF President Gunther Sabetzki is described as being anti-Canadian, but the only supporting evidence given is that he refused to put maple syrup on his pancakes (by that standard, I may be guilty of a hate crime since I don't drink Molson). Sabetzki and a few other international officials are faceless villains, looking for an excuse to toss the Canadians out -- their side isn't given much weight. It would have helped. (though it would have also been difficult -- Sabetzki died several years before this book came out.)

Still, though: this is a really good book. It shies away from hokey, this-is-our-game self-congratulation. Instead it's honest, thoughtful writing, reassuring me that the world of hockey literature doesn't have to be a wasteland.
Posted by gsdgsd13 at 10:42 PM No comments:

Time for that hallowed PPA tradition: apologizing to all three regular readers (thanks, guys) for my prolonged absence. This blog isn't dead, instead it's hopefully due for a rebirth -- I'm working on a multi-pronged project that will (once again, hopefully) be pretty interesting. But it's still in progress, and a ways off.

It's been a strange winter, the warmest I can recall in Atlanta -- after last year's ice storm, this year's been more shorts and t-shirts. We've flirted with 70 degrees the last few days. We've had the air conditioner on. I'm not saying the strange weather -- and the lack of conditions that would lead me to introspection -- is the reason for the idle blog. But I'd rather consider that than the alternative, which is that I'm lazy.

For the end of 2011, both books were fantastic. The McCarthy book won't be much fun if you haven't read Tintin, but if you have, it's amazing. The DFW essays are fantastic and the book made me feel guilty for dismissing an earlier-owned copy as boring ten pages in.

I've been on a Scandinavian noir kick to start this year, obviously, prompted first by the surprisingly good film adaptation of "The Girl With the Dragon Tattoo," and then my disappointment in finally reading the third book in that series and finding that it wholly lacked suspense -- after about 100 pages in, there's not a shred of doubt that everything's going to be okay. Unsatisfied, I've set out to find the great Scandinavian noir novel(s), and well, still looking. "Roseanna" is atmospheric and moody but nothing really happens. Theorin will eventually write something amazing, but his first two have been a mixed bag for me. Effective, creepy, and fascinating ... but the plot of "The Darkest Room" is an absolute mess, the pacing's way off, and it just reads strange. It frustrated me, but at the same time, left me anxious to see what he does next.

"When the Lights Went Out" is something that I've wanted to read for a long time, and I've got a lot to say about it -- and I will, sometime this weekend. Really!
Posted by gsdgsd13 at 4:22 PM 5 comments: