Two rather polarizing books, with radically different audiences. Barker's book drew my attention by virtue of being really thick and getting a nomination for a Man Booker prize; reviews online indicated that it was a love it or hate it novel. I secretly suspected I'd hate it, but just couldn't ignore it. I'm happy to report that I was really, really wrong. "Darkmans" -- which, as people used to hate to hear me say, transcends any genre (but if it didn't transcend a genre, the genre it didn't transcend would be "black humor horror," which doesn't exist) -- has a slew of memorable characters, a kinetic and original writing style, and I probably would have plowed through all 800 plus pages in one sitting if it weren't for things like "work" and "sleeping" and "bathing." Barker keeps a lot of balls in the air at one time and none really drop. The end's really ambiguous, to the point where Haruki Murakami can only look on enviously, and I know that drives some people nuts. Me, I'm okay with it. "Darkmans" isn't like anything else I've read and I absolutely loved it.

After that, I needed something a little easier and when "DVC" was 50 cents at a work book sale, I snapped it up. I'd resisted for a long time; some people who knew me well told me that it was the kind of plot I'd enjoy, others who knew me well told me the writing would make me crazy. Both were right. The codebreaking and the sleuthing were entertaining; the characters were interchangeable and the style was not my thing. Moved quickly at least, and now, finally, I can stop wondering if I'm missing out.
Posted by gsdgsd13 at 6:15 PM No comments:

I followed the NFL draft last night with one purpose: just to make sure the Broncos wouldn't take Tim Tebow.

Understand, I don't care about his personal beliefs, however much we may have to hear about them. If a player can help the Broncos, I don't care if his name's Hitler Stalin and he worships his own feet.

I do care about the fact that at best, he projects to be an average quarterback, and the Broncos already have Kyle Orton and Brady Quinn filling that role. And I have a natural aversion to players that may suffer from a surplus of publicity.

So, followed the draft, and when the Broncos picked someone not named "Tebow" at #22, I let out a sigh of relief, turned everything off and went to read.

Then I woke up to this.

Now, I'm a magnanimous guy, and I look at this as a chance for god to make up for one of his big screw-ups (see footnote on linked post). So I'm going to make a deal: if Tim Tebow leads the Broncos to a Super Bowl championship -- I will go to church.

And -- what the hell, I'm feeling generous -- if he leads them to a SECOND Super Bowl championship, I will go to church A SECOND TIME.

For disclaimer purposes: definition of church is rather loose, and may include mosques, airport chapels, or if it's still open, the notorious fetish nightclub on Cheshire Bridge dubbed "The Church."
Posted by gsdgsd13 at 7:25 AM 2 comments:

I'm A Slut for Sports

The recently-read "Soccernomics" had an interesting -- and home-hitting -- chapter on the "polygamous fan," someone who's maybe not so pure with their loyalties, someone who -- in a weak moment -- is susceptible to the leer of another team.

That's so me. Some years back, my friend Kynan -- who is an Oakland Raiders fan, but still a decent smart person -- called me after the Tampa Bay Buccaneers (one of my football teams) beat the Raiders (Kynan's only team, and boy should you feel sorry for him these days) in the Super Bowl. His message, which has stuck with me, was something along the lines of: "I support this team constantly, while you throw your football affections around like a fat French hooker."

Guilty. (And "fat French hooker" is another line guaranteed to bring in site hits.) I've added or changed loyalties many times over the years, and while in my old age I've more-or-less settled down to two teams per sport (I'm like a sports Mormon), my history isn't too honorable. I'll admit that -- and I'm glad Kuper and the other fellow are giving me a little support.

Let's take a look. Football: the New York Jets were my first team; I picked up the Broncos when we moved to Colorado and the Buccaneers who knows why. I've stayed pretty standard, but sort of abandoned the post-Joe Klecko Jets. Anyone who's ever met a Jets fan will understand why. Atlanta factor: I don't really care about the Falcons.

Baseball: the Houston Astros were my first favorite team, but I sort of forgot them after they dropped the tequila sunrise jerseys. I spent most of my formative years rooting for first the Orioles and Blue Jays and then the Orioles and Cardinals. If I ever start paying attention to baseball again it'd probably be the O's and the C's, but if I move back to Colorado I could probably manage some Rockies love. Atlanta factor: I actively hate the Braves and their ridiculous tomahawk chop and Chipper Goddamn Jones, and every time I've seen them live I've rooted against them.

Hockey: First team I ever supported was the old hockey Rockies, but they left before I really knew what was going on. Grew up a Blues and Penguins (natch) fan; as soon as the Avalanche moved to Colorado, I threw the other teams over like you wouldn't believe. Don't care about the Penguins now, remain fond of the Blues in the same manner (as I once memorably and unfortunately said) as an ex-girlfriend. Have occasionally allowed the Thrashers into my heart and currently own as many Thrashers jerseys as Avalanche jerseys. Atlanta factor: the Thrashers spend the night sometimes.

Basketball: I don't give two shits about basketball -- the last team I seriously supported was the Jack Sikma-era Seattle Supersonics. I suppose I cheer for the Nuggets in the very passive "I hope they do well, but don't expect me to try" way. Atlanta factor: basketball?

Soccer: I've become a Liverpool fan, but it's still kind of a lark and I find it hard to root against any of their traditional rivals (other than Manchester United, who I root against in the same way I root against the Yankees or Dick Cheney). It's a bit weird in a case where there's not really one overwhelmingly dominant leading league; rooting for Liverpool and AC Sparta Praha and the Colorado Rapids isn't really any sort of conflict.

Golf: I hate golf so much.

This all came up recently when good ol' ICJ told me that he was giving up a longtime Flyers fandom for the Buffalo Sabres. I fully supported him. The world needs fewer Flyers fans. And now, I hope he'll be reassured to realize: it's totally normal, being a fat French hooker and all that.
Posted by gsdgsd13 at 7:50 PM 2 comments:

I don't have much of a sweet tooth, but I've got a real bad jones for European black licorice, the really bitter stuff that doesn't seem to fly with palates over here. No clue why or where I picked it up, but I love the stuff. My Danish friend Susanne used to hook me up, but when she moved to London I was left lacking.

Until recently. The desire got pretty bad so I e-mailed her and asked her for some help; she promptly got in touch with a local importer and had them ship me a box.

And it was a box full of wonders. The licorice, of course, in a variety of forms. "Skole-Kridt," which is gummy chalk -- odd but good. And then the real eye-opener: 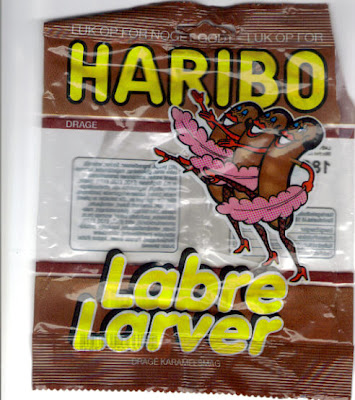 Labre Larver. One site says it translates directly to "Luscious Larvae," which I can't find any other sources to confirm. But "Larver" does certainly mean "larvae," at least according to Google translate, and one can't deny that the characters on the front are definitely larvae... and they're definitely flirtatious larvae. This really trumps gummy worms. I need to lie down just thinking about it.

The candy (all gone now, but yeah, it's more or less larvae-looking) is an odd sort of caramel licorice -- like nothing I've ever tasted, and really kind of pleasant though not something I'd seek out a lot. It seems to be accepted in polite society -- there are two Facebook fan groups. But I still really want to meet the person who came up with this idea.
Posted by gsdgsd13 at 9:07 PM No comments:

Stumbling But Still In It 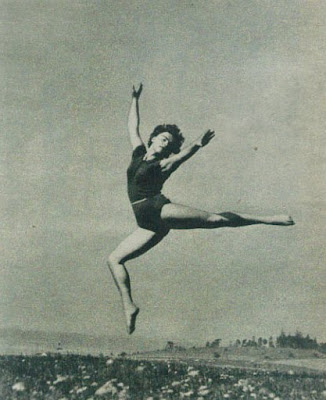 Unheard of behavior for a Saturday morning: I got up and went to something called "Fitness Battalion," the name of which kind of reminds me of the "Environmental Police" back in Boulder. I've needed to shed some pounds for a while -- I've started to resemble a fullback minus the muscle -- and I'm not what you call a self-motivator when it comes to doing much of anything physical, so I went along as a friend-of-member. 45 minutes -- what harm could it do?

Well. I'm still alive, but to my dignity, at least, plenty. First off, I'm glad I was with this program and not another similar crack-of-dawn (ok, crack-of-8:30 a.m.) outfit nearby -- mine was filled with normal people while the other looked like it was preparing for a coup. And mine was plenty tough enough.

First off, a revelation: when I (rarely) do sit-ups on my own, I do them Greg-style: do a sit-up, congratulate yourself, go sit on the couch for a while, read, perhaps have a beer, do a second sit-up. In this group, one sit-up is expected to be followed immediately by the second, and then (!) a third, fourth, fifth and so on. And if (hypothetically) you don't get through all 15 in the time alloted, no one says anything, but oh. Deep down, you know you've failed.

Then we did something called Burpees (I think), which are like regular push-ups except that this is how they do them in Guantanamo. Then a race involving Burpees and running, which left me incapable of saying anything other than "(wheeze wheeze) fuck (wheeze wheeze) shit (wheeze wheeze) goddammit."

Finally something called "Hatemakers," which weren't wrongly named. Next time someone asks me to do a "Hatemaker," I'm going to saucily respond "I'm more of a Lovemaker," and see if that gets me disinvited from any further exercise activities ever.

Several hours later, though, I feel relatively good other than complete lack of function in my limbs (I'm typing this with my tongue), helped along by the decision to reward myself with beer later in the day.

Another one from my guy Tony, made more poignant since this is likely his last completely new work. It's both inspiring and a bit frustrating. The premise is simple -- unrestrained capitalism has led us astray, and a new way is needed. Fine, I'm on board with that, and he makes the case very well. Where it falls down is in terms of solutions -- how do we accomplish the changes he suggests? Well, uh. Not that simple. More courageous politicians, sure, but if the change is ultimately going to come from the people... well, right now, political discourse in this country at least is somewhere south of a Crosby vs Ovechkin thread in terms of intellect and civility. "Ill Fares the Land" sets the right tone, but (largely) I think it's going to be preaching to the converted. The people who need this book the most are likely least inclined to give it a chance.
Posted by gsdgsd13 at 4:44 PM 2 comments: