I've only seen a few photos of Robert Robětín, but he looks like someone life smiled upon. He looks like Cary Grant -- some pictures are so close that he could be a stand-in. In one photo of him and his Dynamo Karlovy Vary teammates, he doesn't look like an athlete but an actor playing an athlete -- more Gary Cooper than Lou Gehrig. Too perfect for sports. He's grinning a bit sheepishly, like he knows he's just too good-looking. But Robětín was indeed an athlete, by all accounts quite a good one. And his life, through no fault of his own, was far from perfect.

It's another photo of Robětín that sticks with me -- with Karlovy Vary again, this time looking haunted, scared. It's projection again, but hard not to read that into the picture when you've read about Robert Robětín's life. 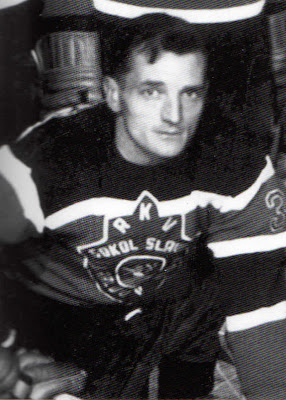 (from "Lední hokej ve městě horkých pramenů," the official history of HC Karlovy Vary. Most of the information in this post also came from there.)

Robert Robětín was born at the tail end of the first World War, in 1918 -- no date, so we don't know if his birthplace was the dying embers of Austria-Hungary or the first sparks of Czechoslovakia. He was born into a well-off family -- the Fuchs-Robětíns had a big stake in the Bohemian paper industry. Before he was 20, both he and his brother, Karel, were regulars on one of the biggest pre-war hockey teams, I. ČLTK Praha.

I imagine a pretty idyllic life for him at that point. Young, good-looking, athletic, well-off. I think of interwar Czechoslovakia the same way, perhaps wrongly -- a young, idealistic country, full of hope.

But the 1940s proved to be a decadem horribilis for both Robětín and the battered little country. After the German takeover, hockey limped along in truncated form, with the Czech league declining first to a league just encompassing what was left of the country after the Sudeten and Slovakia were taken away, then to a series of local leagues when travel became too difficult. Initially, the Robětíns kept playing with I. ČLTK. But then, in 1942, they vanish from the rosters.

The Karlovy Vary team history -- the prime source for information about Robětín -- deals with it very briefly. Those family members that remained in Czechoslovakia were interned -- apparently in Terezín.1 Robert came out alive. Karel did not.

After the war, Robětín resumed playing with I. ČLTK Praha. He played for three seasons, the team's last glory years (they were out of the top league by 1950, briefly coming back as Šverma Jinonice and then Motorlet Praha, before vanishing or being absorbed by other teams). In 1948, there was another blow: the Communist takeover of the country and the nationalization of the family business. Much of the family chose to flee at this point. His parents went to England; other family members ended up in the U.S. or Austria. Robert -- apparently of his own free will -- stayed.

But his time in Prague was done. He was sent2 to work in the mines around the industrial city of Kladno, northwest of the capital.

That might have been the end of his hockey career -- he was now in his 30s and was obviously not in anyone's good graces -- but an old friend came through. Jiří Tožička, another old teammate, was now coaching the second-division team in Kladno. Tožička got Robětín a spot at TJ Sokol SONP Kladno, first coaching kids, then playing.

He stuck with Kladno for two years, seeing them to their first promotion to the top flight, then moved on. Another former teammate -- ex-goalie Jan Tesař -- was involved with the new club in the spa town of Karlovy Vary. It wasn't just hockey that drew him -- Robětín was also a passionate golfer, and Karlovy Vary was the St. Andrews of Czech golf.

There, it appears, he found some peace. Robětín stayed with first Slavia and then Dynamo Karlovy Vary until he was 40, in 1958. The club had been relegated to the second division by then (where they'd stay until the 1990s) but Robětín had a home. After his retirement, he coached youth teams both in Karlovy Vary and nearby Sokolov. He also restored golf courses -- later in life, he'd be better known for this than hockey.

Robert Robětín died in 2002, at either 83 or 84 years old. He outlived both of the political systems that caused him so much trouble. It's hard to know how much things weigh upon another man's emotional scales, but I hope that in the end, it was a happy life.

1At least one more of Robětín's I.ČLTK teammates, Miroslav Slama, was sent to Terezín. He survived, represented Czechoslovakia in the 1948 Olympics, then fled the country, eventually arriving in the U.S. He died in 2008 at age 91.

2It's not clear whether this was a forced labor camp or, less ominously, just some sort of mandatory assignment.

First read this years ago -- now, reading for pleasure rather than school, it's a delight. A calm, reasoned history of European diplomacy between the 1848 uprisings and the end of World War I, it's justly noted as an all-time classic. Not much I can really add about it, if 600 pages on 19th century maneuvering sounds good to you, you'll love it (and have probably already read it). I've got a few more Taylor books stacked up already.
Posted by gsdgsd13 at 8:16 AM No comments:

#14: "The Man Who Went Up In Smoke" by Maj Sjöwall and Per Wahlöö

I read the first book in this series earlier this year and was sorta intrigued -- this one grabbed me thoroughly and I'm not sure how. There's not a lot of action -- one scene, and main character Martin Beck acknowledges that the action takes 3 1/2 minutes of book-time. But I read the whole thing almost straight through, which I rarely do any more. The plot falls neatly into place. I didn't see the wrap-up coming but it was a pleasure to watch it unfold. I'm starting to see why so many people speak highly of the series and I'll get the third volume as soon as I can justify it.
Posted by gsdgsd13 at 9:19 PM No comments:

Hop On Board the Brno Bandwagon

So if you're like me (and who isn't) you're a bit adrift as we enter these NHL playoffs. The Avalanche fell just short, the Thrashers apparently got lost in a snowstorm or something because I can't find them in the standings. I've latched on to a couple teams (the Blues -- my team as a youth -- and the Predators, because go Southern hockey plus they have a bunch of Slavs) but that's more along the lines of "it'd be cool if they won" as opposed to rabid frothing support.

Fortunately, friends, there's another option. The Czech Extraliga hockey final begins tomorrow, and it pits the PPA-supported HC Kometa Brno against Pardubice. Kometa -- for those who have forgotten -- are just a few years back in the top league (after, um, buying their way back in). The top club in the league in the 1950s and 1960s, they won their last title in 1966, fell on hard times in the 1980s and slipped into the lower leagues for quite a while. Imagine if, in addition to all their other problems, the Toronto Maple Leafs had to go down to the AHL for a few years. (Actually, don't imagine that, because it's hilarious and subtracts from the gravity here.)

Kometa's a good club for Avalanche fans to get behind, based on me supporting them. (And if you ignore that Pardubice is Milan Hejduk's old club.) So starting tomorrow, forget the Stanley Cup playoffs -- turn your attentions to the Czech Republic's second city!

I've been remiss in Tomáš Klouček updates this season. I've been following, though. He signed on to the KHL's new Slovakian entry, HC Lev Poprad, at the start of the year. But he found himself a healthy scratch pretty often (the team ended up toward the bottom of the KHL, which shows what happens when you don't use Klouček right) and he was cut loose in a more general bloodletting at the end of 2011. Fortunately, Czech team HC Třinec recognized an opportunity and scooped him up -- he rewarded them with a goal in his first game (and down the line, 35 penalty minutes in a five-game playoff series). He ended up with five points for the season (all with Třinec) and will become a free agent again this summer. Meanwhile, I'm expecting at least some reshuffling on the Avalanche's blueline. I see a convergence of my interests coming.
Posted by gsdgsd13 at 12:29 PM No comments:

I first read this some years back and was really disappointed. I'm not sure why in retrospect -- I guess I wanted my old-timey New York to be romantic and dashing, and Sante's determined to point out that the city's criminals were ill-educated and often motivated by poverty and racism. Reading it now, even the non-romantic version is very fascinating (and with plenty of great tales, so I'm not sure what 2002-era Greg was complaining about). The biggest complaint is that Sante doesn't hit the gas enough -- parts of the book just read like a ledger of misdeeds, but as he shows toward the end, when he just lets loose and writes like crazy, he's FAN-TAS-TIC. It may be time for me to give "The Factory of Facts" another try, though I tried to start that about 16 times and never got into it -- it's the Nikolai Zherdev of books.

Firewater's first two albums, full of sordid tales of NYC's crooked and screwed, provide an effective soundtrack to "Low Life." "Get Off the Cross" came out when I was in my earlier life as a music critic, and I remember getting the initial press release for the album -- Cop Shoot Cop frontman does klezmer! That sounded like the worst idea on earth, but man, "Get Off the Cross" was one of the landmark albums in my life. I moved recently (hence the radio silence) and dug that and "The Ponzi Scheme" out for play up and down the Atlanta highways, and they still sound just perfect today. Sad tales of doomed junkies may seem a bit odd for a move out to the suburbs, but somehow it worked. I was a little less enamored of their output after that -- "Psychopharmacology" had some great moments but left me a bit cold, "Man on the Burning Tightrope" has never made much of an impression on me, "Songs We Should Have Written" was a cute idea extended too far -- so I was really happy to see their last album, "The Golden Hour," just plain blaze. I'm even happier that they've got something new coming out this year. For someone who doesn't get a lot of new music, 2012 is turning out to be a banner year -- new Unsane and High on Fire already, new Firewater coming, Kiss it Goodbye gets back together (even sans Huckins, that's great news). It's like the '90s never ended!
Posted by gsdgsd13 at 8:20 PM No comments: