I'm thankful for whoever was cool enough to post highlights of a 1959 Dynamo Pardubice-RH Brno match on YouTube.

Happy Thanksgiving, readers of a never-updated blog!
Posted by gsdgsd13 at 12:21 PM No comments: 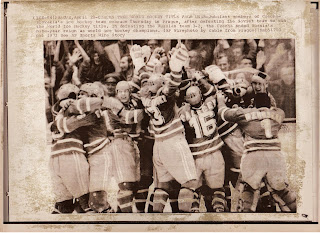 Hockey's world championships are an afterthought in the best years, and 1972 wasn't the best year. On the international tournament slate, it ranks a distant third behind the Olympics two months earlier and the Summit Series five months later. Canada didn't take part, in the midst of a lengthy and probably justified boycott over having to field amateurs while the Eastern bloc teams used their best players. The USA had slipped to Group B. I imagine the tournament didn't make a blip in the Western Hemisphere.

These guys don't seem to care, though. This (click for bigger) is an AP wire photo of the victorious Czechoslovakian team, celebrating their victory over the Soviet Union. I've written about this other times. It was the country's first international ice hockey win since 1949. It was a pretty big deal. (edit: I'm a dummy. This was the penultimate game and more or less clinched the title, but it wasn't actually secured for two more days, when Czechoslovakia beat Finland.)

Only a few of these players can be identified. Second from left, in an embrace, is my man Rudolf Tajcnár. Behind him, facing the camera, is probably a Holík. I'm guessing Jiří Holík but don't put money on it on my say-so. Then we have three guys with names visible, Josef Horešovský, Josef Paleček, and backup goalie Vladimír Dzurilla. Not sure whose face is visible above Dzurilla's head but my guess is Václav Nedomanský. Not sure who Tajcnár is hugging -- my initial thought was chum and frequent defense partner Milan Kužela, but he didn't dress for the game. Looking at relative height and the rounded portion of the number, it's probably Vladimír Martinec or Jan Klapáč. Don't worry, there won't be a test. I just feel compelled to note these things.

It's really only in the last twenty years or so that hockey fans have been able to see the best players of the whole world all at once. Most of these guys were only known to diehard fans of the international game; of this year's Czechoslovakia team, five (Tajcnár, Nedomanský, Richard Farda, Ivan Hlinka, and Jiří Bubla) ever played in North America, and only one (Nedomanský) was still in his prime when he headed over.

For me, the most noteworthy part of the NHL lockout is how little I'm missing it. I've paid some attention to the Czech league, less attention to the coverage of the lockout (lots of people who aren't qualified to discuss economic issues talking about economic issues, lots of people who aren't qualified to discuss labor relations talking about labor relations), but mostly the NFL and real life have filled the void without an ache. I hope they resolve the situation for all the normal human reasons -- I don't want the world to be without something pleasant and entertaining, I don't want people who love something to be denied that thing -- but as far as day-to-day life goes, I just don't really care.

I'm probably not a good fan any more (though I'm not really inclined to pay much heed to anyone who feels like it's important to measure who's good and who's bad at fandom), but I used to be. There was a long period of my life where my primary description of myself would have been "hockey fan." Now, if they wipe out another season, it won't have much of an impact on me.

Me and the NHL, man. In the words of the Gorilla Biscuits, "we don't hang out but that's okay."
Posted by gsdgsd13 at 6:52 PM No comments: